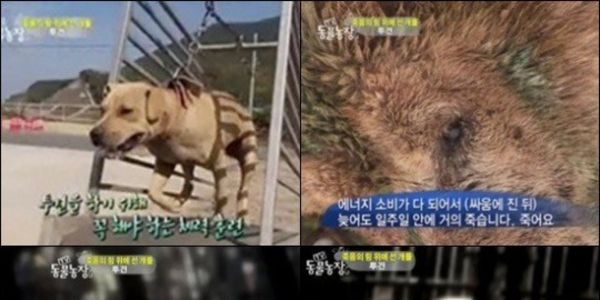 Dogs Are The Victim of Human Fights: Stop It Now!

These days we see various pets around us. Dogs, cats, hamsters, and all kinds of animals. People often call them family and take good care until they leave their side. Unfortunately not all animals get to live a luxurious life. Some animals are forced to kill each other until death and dog fight reflects it very well. It is a inhuman action and shall be abandoned.

Dog Fighting has been a big dilemma that has been occurring in Korea. It's still going on illegally in areas that we are unsure of. Humans isolate these dogs with regular dogs and train and found dogs locked up in crates. They are tied up with thick chains that strangle their napes. These fights occur in different locations at different times, it could take minutes, even hours. Animals suffer injuries, such as wounds, blood loss, broken bones and although, fights are not usually to death, many dogs succumb to their injuries.

Dogfighting is a violent and highly secretive enterprise that is extremely difficult for law enforcement and investigative professionals to infiltrate. The most consequential predicament is that the people who torture dogs think of dogs as an object, not as a living organism and they perform dog fighting for the sake of entertainment.

The punishment of animal abuse is 2 years in jail and severe cases, they would have to pay 20,000 dollars. Although people know the consequences that come along with dog abuse, there are still people that aren't aware of this event.

Although the issue is widespread and severe, there are things every one of us can do in order to solve this problem. First of all, we can observe and identify signs of dogfighting. For instance, Dogs with severe injury or heavy chains can be one of the possible signs of dogfighting. Secondly, the government should reinforce specific and strict laws with harsh punishments. Currently, laws relevant to animal rights are too broad and the punishments are extremely weak.

There are numerous problems to the current state of dog fighting in Korea.

First, there isn't a rigorous monitoring system to ensure that there aren't illegal dog fighting sites. As mentioned above, by the Korean law, dog fighting is illegal; however, because it is a profitable entertainment business, some will open it secretly. But because of porous - or even nonexistent - system for catching out those illegal businesses, many get away.

Third, it is easy for these illegal business owners to re-open even after getting caught. There isn't a follow-up system to verify whether or not these people are reopening dog fighting businesses, which perpetuates the cycle of cruelty.

Dog fighting is an outdated, inhumane form of entertainment that must be stopped. By turning a blind eye to this issue, we are supporting those who derive joy from the pain of the other. Sign this petition to stop this cruel practice!

Care2
Dogs Are The Victim of Human Fights: Stop It Now!
SHARETWEET