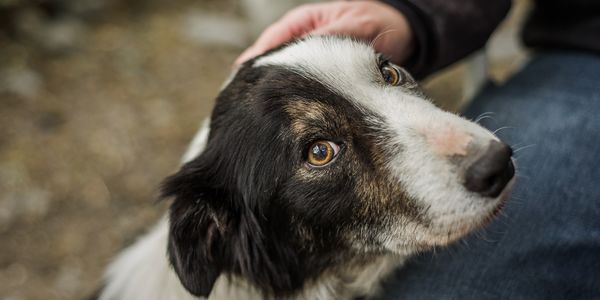 Hikers in the Scottish Highlands heard the dog before they saw him -- a pile of heavy rocks crushed down on the poor Border Collie's body, hiding him from view. But his cries were enough to attract the passersby's attention and soon the pup, who rescuers named Jake, was rushed to safety.

But no one has yet been held accountable for what one SSPCA inspector called "truly one of the worst cases" she has ever seen. Sign the petition to implore the Scottish Society for the Prevention of Cruelty to Animals (SSPCA) to find whoever did this to Jake!

When Jake was excavated from beneath the heavy pile of rocks where he had been buried alive, his harrowing journey was far from over. Being buried alive wasn't all that sweet Jake had been subjected to. Upon examination, vets found multiple fractures in Jake's skull and jaw. Even to the untrained eye, Jake's head looked painfully swollen. One of the poor dog's eyes was so badly damaged from the abuse he suffered, it had to be surgically removed along with multiple broken teeth.

Jake was "on the brink of death" and rescuers were certain he wouldn't survive; they must have just been grateful to give him a warm, safe place to spend his final days. But against all odds, and the will of his cruel attacker, the Border Collie began to slowly recover. Today, Jake is fully healed and the most wonderful part of it all is that he has been adopted by one of his rescuers!

But no one has been charged with this abhorrent act of cruelty. The case is so serious, very few details have been released, in part to protect those who found Jake. The SSPCA clearly believes that whoever did this is still a threat, both to animals and humans.

Will you sign the petition to help add public pressure? They need to find and charge Jake's assailant so that they cannot victimize another innocent animal or person ever again!