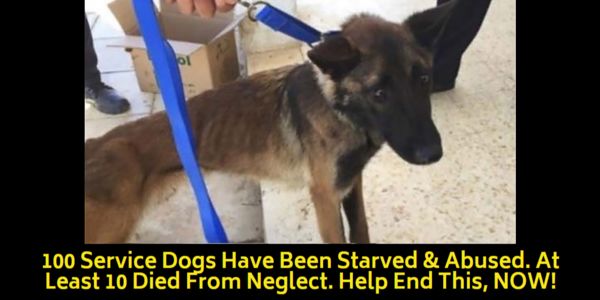 Dogs that saved countless human lives are now being severely abused! Add your name if you want to end this barbaric cruelty, NOW!

"A blistering report, released by the State Department’s Office of Inspector General last week, found that since 2008 at least 100 American bomb-sniffing dogs have been starved and abused, and at least 10 — possibly more — neglected to death," reported the New York Post.

They went on to say: "Their Jordanian handlers expressed nothing but contempt, throwing the dogs’ food on the floors — floors with improper drainage, broken and sharp tiles, floors covered in dirt and feces."

But it gets worse... Some of these dogs, whose only goal in life is to help people, are neglected so badly that they perish in horrifying conditions.

Zoe, a 2-year-old Belgian Malinois, died of heatstroke, according to the same source.

Mencey, a 3-year-old Belgian Malinois, arrived in Jordan in excellent health. Within nine months, he had contracted a tick-borne disease, and was shipped back to the USA, where he was euthanized.

These dogs are born and raised to save human lives. That's all they know how to do. And this is the treatment they receive in return...

"The dog saves you and saves your team," said a military dog handler named Daniel.

Don't you want to stop this disgraceful treatment of brave, selfless dogs who want to do everything they can to save human lives?

Then add your name to demand that Nathan A. Sales; Acting Under-Secretary for the Bureau of Counterterrorism; shut down this program that leaves our military service dogs with people who treat them like garbage.
Sign Petition
SHAREShare this petition with friends!TWEETEMAILEMBED
Sign Petition
See more petitions:
You have JavaScript disabled. Without it, our site might not function properly.