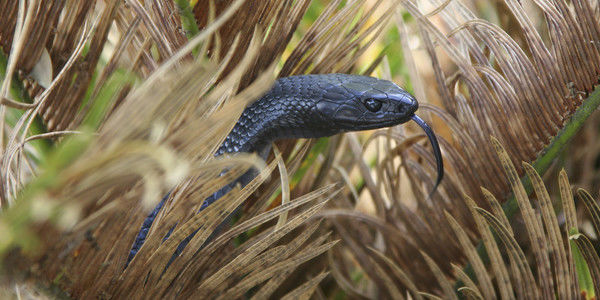 These Important Snakes Were on the Edge of Extinction. Thanks to Conservationists, They're Coming Back Home!

Snakes are a vital part of our ecosystem, but they're often maligned and misunderstood. Because snakes are both predators and prey for other animals, they help sustain the food chain -- while keeping the populations of other animals in check without the need for harsh or toxic chemicals. For example, without snakes, rats and other rodent populations can quickly spiral out of control!

The Eastern indigo snake is no exception to this rule -- they are a very important species in the U.S. In fact, they're the largest native snakes in the U.S., but over the past several decades, they've become increasingly rare. They're now federally listed as a protected species.

Before the 1950s, Eastern indigo snakes lived throughout the state of Alabama. Sadly, human construction and habitat loss pushed these special creatures out, and they ultimately went extinct in the state.

Thankfully, some Eastern indigo snakes survived in Georgia. That enabled a team of conservationists to start a program to breed and reintroduce the snakes to their native Alabama. Since 2006, the team has worked to create a viable population of snakes in the state, one step at a time. Now that their hard work is paying off, we must prevent this from happening again!

Sign the petition to demand better government protections for the Eastern indigo snake's habitat! We must preserve them before they're lost entirely!

As the Alabama Wildlife and Freshwater Fisheries Division explained on Facebook, "The snake found yesterday indicates the project is resulting in some thriving and reproducing indigos -- just what we wanted! Reintroducing a species to its native range is a daunting task, and we celebrate each step of its success!"

Conservationists in various organizations worked together to make this happen,: including state and government departments, such as the Alabama Department of Conservation and Natural Resources, the U.S. Forest Service, the U.S. Fish and Wildlife Service, as well as Auburn University and other collaborators.

Now that the rare Eastern indigo snake is coming back to its homelands in Alabama, we have to make sure we don't lose these reptiles again. Demand government protections to conserve these snakes' habitat from further destruction!
Sign Petition
SHAREShare With FriendsTWEETEMAILEMBED
Sign Petition
See more petitions:
You have JavaScript disabled. Without it, our site might not function properly.

Care2
These Important Snakes Were on the Edge of Extinction. Thanks to Conservationists, They're Coming Back Home!
SHARETWEET