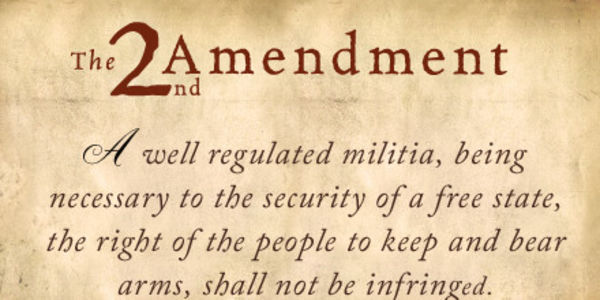 THE RIGHT TO DEFENSE!!!

In the past weeks we have seen many instances in which people, who mentally are not right, go to school with firearms and start shooting people for no apparent reason other than that they lack something in the brain, also known as mental illness.  The first thing many politicians do is try to hold the NRA accountable.  They claim that the NRA is an evil corporation that wants to harm millions of Americans. That is one hundred percent false.  These are facts.  The NRA is much like a club, in which the people choose to pay for a membership.  This means that the NRA is only as strong as how many supporters have.  Which is quite big.  Claiming that they are an evil organisation means that you are calling the American people evil.

The NRA stands for the same principles that our founding fathers fought for, mainly seen through second amendment, also known as the right that protects all rights.  The right to keep and bear arms, SHALL NOT BE INFRINGED.  The NRA simply stands with people and politicians who represent them, and urge all Americans to vote for laws that allow them to defend themselves.  The CEO Wayne LaPierre could not have said it better himself.  "What the NRA is fighting for is reciprocity, to enforce the existing federal gun laws and to protect Americans' right to protect themselves."

Now going back to the point.  In recent weeks, many democrat politicians, both local and federal, have reacted in a manner that is despicable.  Claiming that we should have more gun control in order for their to be less firearms in the public.  This has been done before in cites such as Chicago and Detroit, and what has the result been?  An increase in crime, the likes of which have never been seen before.

So the question we must ask ourselves is this. why isn't gun control working, or why doesn't it work?   Well the answer is very simple, and this is why our founding fathers may be deemed some of the smartest people in history!!  The reason gun control doesn't work ,and will never work is because it is a law.  Now let that sink in a little bit, because this brings us to a different question.  Who follows the law?  Law abiding citizens, or criminals?  The answer is very simple.  Law abiding citizens.   If we vote for politicians who will vote for legislation to get rid of our firearms the result will be an America in which the law abiding citizen turned in his or her guns.  At first it sounds good right?  WRONG!!!    What you forgetting is that we will still have criminals whos eyes see the law as a crappy piece of paper.  They will not care what the law says, they will continue to buy guns illegaly.  The actual result will be an America where law abiding citizens don't have guns,  and criminals do.  This will lead to the biggest crime rates in the history of our country!!!!

This leads me to the SOLUTION.  How do we apply this to our schools and protects our youth and the future generations of our great country?  The answer is simple.  What we must do is make a law in Texas that will have all public schools require half or at least a fourth of all staff and teachers on campus to take a mandatory self defense class, and to be required to have a firearm on campus after they have passed the class, so that then, in the moment in which there is a threat to the school, we will be more than prepared to defend ourselves against any threat.  This will result in the saving of countless lives in these instances, and a huge decrease in crime rates.

But we shouldn't stop there!!! That is only part A of the plan.  There are still more measures that we can take.  This next part will guarantee that we wont even have to be in an instance in which there is a school shooter.  The answer is this.  All schools will also be required to have a sign on all main entrances that read the following.  " The staff's of all schools are ARMED and TRAINED.  Any attempt to hurt the staff or students, WILL BE MET WITH DEADLY FORCE."  This is where the NRA can step in.  U.S. schools and the NRA can come together!! The NRA can be the organization that provides these services of self defense to teachers of our schools.

Thank you for taking the time to read this petition that is so important and is key to protecting the American youth, and the future generations to come.  If U.S. schools and the local governments agree to all of this, you can be rest assured that our schools will be a safer place to learn and to succeed.  It is time for school shootings to end and this is the first step in doing so.

Care2
THE RIGHT TO DEFENSE!!!
SHARETWEET