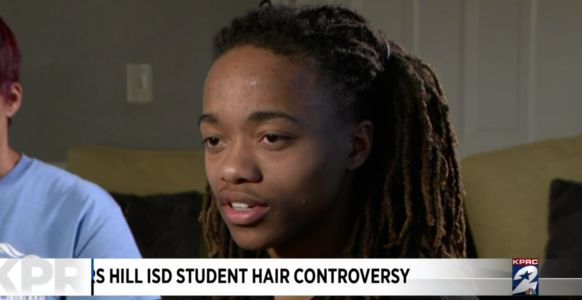 If DeAndre Doesn't Cut His Locs, the School Won't Let Him Walk for Graduation

Black hair, white opinions, we see it every year, usually around the beginning of the academic season. Still, one Texas school has decided to impose its anti-black hair policy a bit early this year.

Barbers Hill High School lies just outside of Houston, Texas. It also seems to be far outside of common sense. The superintendent, Gregory Poole, has decided that male students with long hair are inherently bad students and don't deserve the right to walk at graduation, regardless of their actual grades. That is the nonsense high school senior DeAndre Arnold - who wears his hair in locs - is dealing with.

Locs are a uniquely black hairstyle, rooted in their culture and tradition - for DeAndre, he chooses to wear them because he says they connect him with his Trinidadian heritage. Since the 7th grade, the young man has been growing his locs proudly, and up until Christmas break, there had seemingly been no problem.

Before then, the high school still had an obnoxious hair policy requiring male students' "hair to remain off the shoulders and above the earlobes" - but DeAndre avoided scrutiny by pinning his hair back when he went to school. After the holiday, however, he returned to find that the school's policy had become even more Orwellian. The new policy stated, "Male students' hair must not extend below the top of a t-shirt collar or be gathered or worn in a style that would allow the hair to extend below the top of a t-shirt collar, below the eyebrows, or below the ear lobes when let down."

Now they have told him that if he doesn't cut it, he cannot come back to school nor will he be able walk at graduation, a pivotal moment in every student's life. For his part, DeAndreis standing strong and says he will not cut his hair to please "Massah" Poole, but the fact that the school would even have such a ridiculous policy is a serious issue that needs to be remedied. Some governments are even doing something to stop these policies before they start. Last year, California became the first state to ban discriminatory hair policies.

Barbers Hill ISD should follow their lead. Sign the petition and demand that superintendent Poole allow Mr. Arnold to wear his and walk proudly down the aisle for graduation.
Sign Petition
SHAREShare this petition with friends!TWEETEMAILEMBED
Sign Petition
See more petitions:
You have JavaScript disabled. Without it, our site might not function properly.

Care2
If DeAndre Doesn't Cut His Locs, the School Won't Let Him Walk for Graduation
SHARETWEET