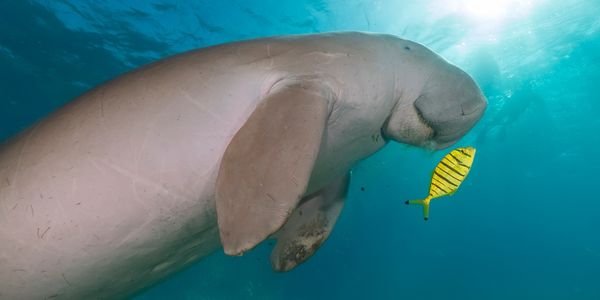 Adorable Sea Cows Are Dying. In Some Places, They're Already Gone. We Must Protect Dugongs Now!

The only marine mammal on the planet that is entirely vegetarian is facing extinction. Called the dugong, or "sea cow," it inspired stories of mermaids and sirens' songs for hundreds of years. But now, due to seagrass vegetation die-offs and fishing net deaths, dugongs are on the decline.

Several of its cousin species are already extinct. We can't let that happen to the adorable dugong, too.

Authorities in China must take action now to save the dugong, while they still can. Sign the petition now!

Already, dugongs are "functionally extinct" in the waters off of China. Over the past 50 years, their population has seen a dramatic decline - and now, it appears that dugongs are virtually gone from Chinese coastal waters. While some individuals remain in the area, there aren't enough of them to successfully reproduce and keep their community alive.

Luckily, dugongs are not yet fully extinct from the whole planet. Some populations still live in the waters around Australia, and also in the coastal areas off of multiple other countries, especially in the Persian Gulf. But they're still under tremendous threat. As Gabriel Grimsditch at the United Nations Environment Program says: "outside of these two regions most dugong populations are in dangerous decline," and we must pay attention to "the extinction threat they face across their [habitat] range."

That extinction threat is, unquestionably, coming from us humans. Sea cows rely on seagrass to eat, and therefore to breed and raise new generations. Their entire life cycles rely on access to this vegetation source. But pollution, climate change, and human construction projects are destroying this invaluable plant.

On top of that, dugongs are often subject to hunting, poaching, and even overfishing. When people harvest fish by indiscriminately tossing nets out into the oceans - especially gill nets - dugongs often wind up entangled, caught against their will. And then they die.

The writing is on the wall: dugongs will not continue to survive if we treat them this way. We can no longer continue to wantonly destroy their ecosystems and food sources, or approach fishing in such a haphazard manner.

That's why we're calling on Chinese authorities to intervene and set stronger protocols to prevent seagrass depletion and reckless fishing. The government must create and enforce regulations in order to protect the dugongs who still exist off their coasts - and nourish them back into fully healthy populations! Sign the petition now.
Sign Petition
SHAREShare With FriendsTWEETEMAILEMBED
Sign Petition
See more petitions:
You have JavaScript disabled. Without it, our site might not function properly.

Care2
Adorable Sea Cows Are Dying. In Some Places, They're Already Gone. We Must Protect Dugongs Now!
SHARETWEET