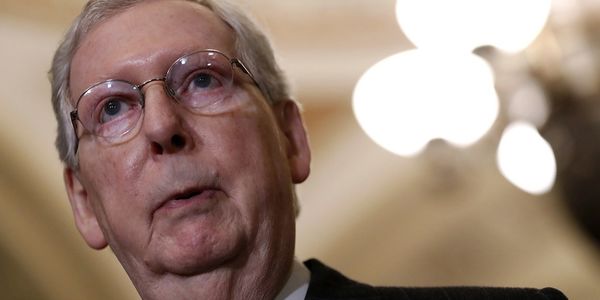 As part of his continued assault on our democracy, Mitch McConnell has decided to trigger the "nuclear option" to confirm Trump's nominees at an even faster clip.

The move by McConnell reduces debate time on most presidential nominees from 30 hours down to just 2 hours. In deciding to do so, McConnell criticized Democrats' "systematic obstruction" of judicial nominees as justification to use the nuclear option, which will allow Republicans to confirm scores more judges in the final year or so of Trump's first term.

Except somehow, amid Democrats' supposed "systematic obstruction," Republicans have already managed to confirm 37 appellate court judges in just over two years, including judges who are rated "not qualified" from the American Bar Association. For comparison, Obama got 55 appellate court judges confirmed during his ENTIRE 8-year term.

And Senate Republicans during the Obama era ABUSED these same rules that McConnell is now eliminating, using them to delay votes for Obama's nominees for sometimes as long as 138 days… only to then receive UNANIMOUS confirmation votes. In other words, these picks were CLEARLY qualified and had bipartisan support, but Senate Republicans were nonetheless intent on delaying them as long as possible.

But clearly, the most absurd part of McConnell criticizing Democrats' supposed obstruction is that he was the architect of the unprecedented move of denying Obama's Supreme Court nominee, Merrick Garland, a hearing and a vote in the Senate, despite the fact that it was Obama's constitutional duty to name a nominee, that he had nearly a year left in his term, and that no president had ever been denied their constitutional right for a SCOTUS nominee to be considered.

So while McConnell continues to denigrate our democracy on behalf of the Republican party, his decision to trigger the nuclear option should be a massive red flag to anyone who cares about the future of our democratic institutions.

We, the undersigned, demand that the Senate Majority Leader reverse immediately his misguided decision and, for once, put country over party.