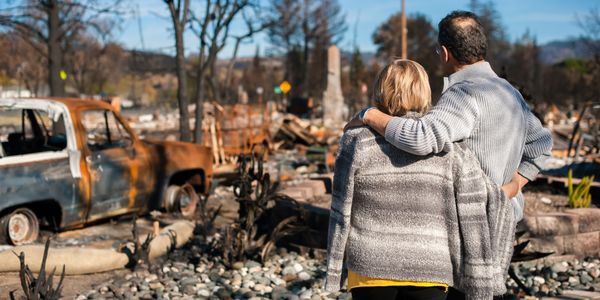 Oregon desperately needs real federal aid as they fight the deadliest fires in the state’s history!

Chris left his home in a hurry -- he was headed to borrow a friend's trailer so he could evacuate himself, his wife, their 13-year-old son, and his 71-year-old mother in law to safety, out of the path of one of the almost 40 wildfires raging across Oregon. But he had not even arrived back home by the time the flames engulfed his house with his family still inside. Chris persevered and drove through a roadblock only to find his wife in the middle of the road, naked -- the fires had burned her clothes and shoes off, and left her in critical condition. Their son, his grandmother, and their sweet dog were all found dead in a car back at the family home. They had been trying to escape the inferno.

This is happening in Oregon right now, and things are going to get worse before they get better. Sign the petition and urge the Federal Emergency Management Agency (FEMA) to provide immediate, tangible aid to Oregon -- not just the promise of paying them back once the crisis is over.

This season's wildfires are the deadliest in Oregon's history. The unprecedented destruction has left the state reeling, and aid is spread thin between other West Coast states as almost 5 million combined acres of land have burned so far. FEMA has approved aid for the state in the form of extra firefighting efforts and emergency housing for the displaced. But the parameters of this aid are very vague, and the financial parts are retroactive, meaning for now, Oregon taxpayers -- the ones who are fighting for their lives amidst smoke and flame -- are covering the bill. And there is no way to know how much of the expenses will be paid back.

What the state needs is comprehensive, immediate relief so that a few things can happen without delay. First, Oregon must stop using prison labor -- aka slave labor -- to fight these fires. At least 150 incarcerated people are in the fray, risking their lives for less than $10 a day. This is a steal compared to the salary of the Oregon National Guard, who have also been deployed to combat the wildfires. With immediate financial aid from the federal government, Oregon could replace these incarcerated people with first responders who are trained, willing, and paid fairly to enter into an emergency setting. Forcing incarcerated people to do so just to cut costs is shameful. We have seen from their involvement in peaceful Black Lives Matter protests that the National Guard is available. Just last May they sent 6 firefighting helicopters to Afghanistan, even though they knew wildfire season was coming. The federal government needs to stop using these resources for its military agenda and start using them to save lives here at home.

Second, state relief is already in a deficit due to the current pandemic. The federal government has failed its individual states in providing resources, materials, and guidance on how to best combat COVID-19. This is a respiratory illness which the CDC has already said causes far more severe complications when combined with wildfire smoke. People who have COVID-19 are at a higher risk in these areas, and folks who are suffering from smoke inhalation have lowered defenses for virus transmission. The federal government should send masks, as well as filters that can be added to cloth masks and home filtration systems, en mass to Oregon so that folks who are in high-smoke areas can stay healthy and safe.

Thirdly, FEMA has said they will cover the costs of temporary emergency housing for those displaced during fires. But there are no specifications about those who were without housing before the crisis. Homeless populations suffer exponentially during natural disasters. Shelter is a human necessity, and in extreme conditions a lack of shelter can be a death sentence. FEMA must provide specifically allocated funding so that Oregon can house its homeless population as well as provide food, water, and basic necessities. This type of relief should be offered to those who have evacuated, lost their homes, and to those who did not have homes to begin with.

These wildfires are a perfect example of the federal government not being ready for a waterfall scenario of crises. Global warming has caused more frequent and more intense natural disasters, and a pandemic was not going to put that scenario on hold. The federal government must step up! Demand that FEMA provide immediate, thorough emergency relief to Oregon.
Sign Petition
SHAREShare this petition with friends!TWEETEMAILEMBED
Sign Petition
See more petitions:
You have JavaScript disabled. Without it, our site might not function properly.