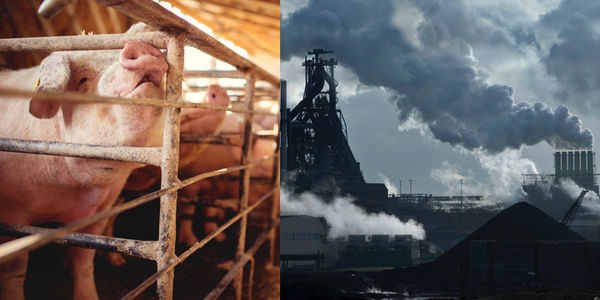 Factory farming is causing runaway greenhouse gases. It could doom us all.

Picture every single car, van, and other roadway vehicle throughout all of the European Union. Every single one, combined. Now picture all of the petrol they use, and all the greenhouse gas emissions they produce.

And then, picture an industry that produces EVEN MORE greenhouse gases. It might be difficult to imagine, but such an industry does exist. Can you guess what it is?

The answer is animal farming in Europe.

Sign the petition to demand a reduction in the farming of animals for human consumption!

We already know that factory farming and other forms of livestock-based agriculture are cruel and heinous ways to treat other living creatures. Our need to automate and increase meat production on a large scale have come at the cost of welfare and life: animals crammed into overcrowded cages or transports, often suffocating or crushing each other to death; violence from handlers that is hushed up or overlooked so that production doesn't shut down; owners skipping necessary veterinary care, including pain relief and anesthesia, because they deem it too expensive. Factory farming could not operate at its current scale without cruelty towards animals. But now we also know it's literally killing us — and our Earth.

Because of humans' insistence on eating as many other animals as possible — particularly domesticated animals like pigs, cows, horses, chickens, and turkeys — global greenhouse gas emissions are exploding. This comes even at a time when the need for reducing carbon dioxide production couldn't be greater, due to continued and worsening climate change.

Yet we still don't seem to be listening to this reality. In 2018, the most recent year for which we have reliable data, every car and van in Europe combined released approximately 656 million tonnes of carbon dioxide, cumulatively. That same year, farm animals and the associated water and land use (including deforestation) accounted for 704 million tonnes of carbon dioxide. This all came about during the same period that the EU saw a huge rise in meat and dairy production and consumption. From 2007 to 2018, livestock-related emissions increased by nearly 10%.

The European Union has claimed it cares about stopping and reversing climate change. It's talked a big talk through its Paris climate agreement commitments. Supposedly, the EU intends to cut its greenhouse gas emissions by 55% within the next 9 years (by 2030) — yet that is exactly the opposite of what is currently happening.

The experts have spoken loudly about this: if Europe doesn't get the livestock agricultural industry in check, it has ZERO CHANCE of reaching its target levels for reduced emissions. And if it doesn't meet those target levels, it can't help global leaders stop the rise of climate change.

The science and the data are clear. Europe MUST reduce its reliance upon meat and dairy if it is to help lead the world forward to a brighter — but cooler — future. Does it have what it takes? Or is it just too "chicken"?

Tell the European Union: live up to your Paris climate commitments, and reduce your reliance on gaseous meat and dairy products!
Sign Petition
SHAREShare this petition with friends!TWEETEMAILEMBED
Sign Petition
See more petitions:
You have JavaScript disabled. Without it, our site might not function properly.

Care2
Factory farming is causing runaway greenhouse gases. It could doom us all.
SHARETWEET