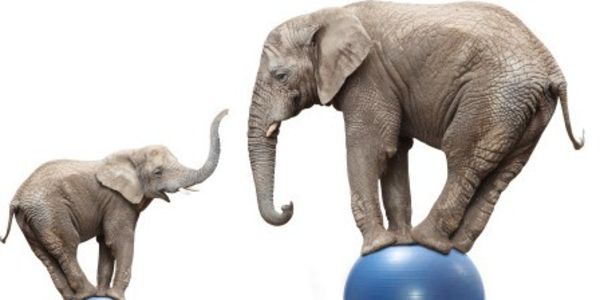 We have all enjoyed a day at the circus for as far back as when we were all young but most often at the time never gave thought to what the animals endure behind the scenes.  As cute as they are in plain view, for the purpose of entertaining you and the rest of the audience, these animals often live in tight confined areas and undergo extreme mistreatment when undergoing training sessions. Animals are not meant to live under such conditions.

Investigations have recently revealed such conditions and abuse at the Circus World in Baraboo, Wisconsin.  Read more at http://ministryofveg.com/big-cats-and-elephants-like-libby-need-your-help-at-circus-world & http://www.defendanimals.net/blog/big-cats-and-elephants-like-libby-need-your-help-at-circus-world-httpstcogxo8k1k2aq.  Circus World has been contracted with Carson & Barnes Circus who has a history of abuse and cruelty to its animals like the elephants.  The trainer has been caught on video using bullhooks on the elephants while also shocking them with electric prods.  He has been witnessed instructing others to pierce the animals flesh with the bullhooks, twisting it until the poor animals are screaming in distress.

Additionally, tigers in these facilities, as stated in the articles, endure lives of abuse, neglect, deprivation, and confinement. They are forced to live in virtually barren cages that can't come close to the vast, dense forests that they would roam in the wild. Many are forced to eat, drink, sleep, defecate, and urinate all in the same small space and are only let out for training or performances. During training, these beautiful cats are often dragged by heavy chains or ropes around their necks and hit with sticks, poles, and whips. Circus World is joining in the abuse by continuing to work with the Carson & Barnes Circus.

The effort in this petition is to urge Circus World to end the cruel and archaic animal acts and also to never work with the allegedly abusive Carson & Barnes Circus.  In this day and age, it seems to be a poor decision to add animal acts at a time when more and more circuses are getting rid of them.  You can help with this issue by signing and sharing this petition, adding your own ideas and comments on protecting circus animals.

Chairman and CEO Steve Freese of Circus World – I was highly disturbed to learn that you are again working with the Carson & Barnes Circus, known for their mistreatment of animals and hundreds of Animal Welfare Act violations.  It is equally disturbing that the same abusive trainer would be handling the animals despite video footage of his cruel training. In this day and age, it seems to be a poor decision to add animal acts at a time when more and more circuses are getting rid of them.  Please end all animal acts rather than causing more living beings to suffer and stop working with the allegedly abusive Carson & Barnes Circus.