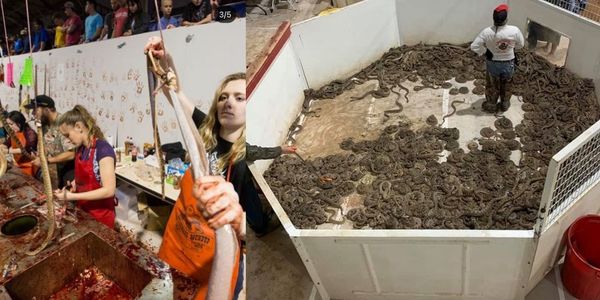 Thousands of snakes are gassed, starved, tortured, and killed at this event every year

We all know what a rattlesnake's "rattle" means -- run. Whether you learned about it from TV or movies, or from real life experience, you know that this rattle is the precursor to a strike. But of course, like all wild animals, rattlesnakes lash out at people out of fear --  if you leave them alone, they'll do you the same kindness, and you'll both be a lot less afraid.

Following this line of thought, a rattlesnake's "rattle" is the really the closest thing it has to a scream. And at this bloody event in Sweetwater, Texas, the screams are ear-splitting.

This horrific event, which has been going on for over 60 years, is utterly gruesome from start to finish. First, rattlesnake hunters flush poor, solitary snakes out of their dens by pouring gasoline into them, forcing them to flee or suffocate. Gassing obviously takes its toll on the snakes, their first of many traumas to come, but it also poisons the land and nearby plants and wildlife. It's such an environmental hazard that it's been totally banned in 29 U.S. states.

And that's not the only issue that this huge roundup of rattlesnakes causes within ecosystems. Rattlesnakes are a food source for birds of prey, many of which are threatened in the U.S. These reptiles also help control rodent populations, and stop them from spreading disease -- rattlesnakes can eat a sick mammal, and that disease won't transfer to reptiles. Rattlesnakes also help plant life thrive, carrying the seeds from the bellies of their prey and depositing them as they slither about. Rattlesnakes are vital to so many other forms of life.

Once the snakes have been cruelly, violently stolen from their homes, they are stuffed into tiny cages together where they bite, suffocate, and defecate on each other out of fear. When the poor things are dropped off at their final deadly destination, the Sweetwater fairgrounds, they are milked for venom -- a needlessly traumatic procedure, since no one will produce antivenom from a snake that has been gassed.

Then, the final act begins. Rattlesnakes are thrown into a huge pit, its tall walls fitted with low windows so that tiny children can watch the violence. The rattling, hissing, terrified snakes would never have been in such a large group in the wild, so they panic even more. One by one, the innocent animals are decapitated. Their bloody stumps and disembodied heads are passed around for photos, or for people to try their own hand at skinning their bodies -- the reward for this is getting to put your own bloody handprint on a mural wall of murder.

This event started in 1958 to cut down rattlesnake populations back when ranchers perceived a threat to livestock and people. But in the past 20 years, there have been zero USDA recorded deaths among cattle from rattlesnake bites. And all venomous snakes together-- not just limited to rattlesnakes -- kill about 5 people every year.

This festival is certainly an economic bolster for the town of Sweetwater, where 25% of the population is living in poverty, and many fear that without it things could get a lot worse. The government of Texas should not force these residents to choose between saving countless animal lives and going hungry -- they need to offer a better solution.

The 2021 Sweetwater Rattlesnake Roundup has already happened. Thousands of maskless guests and staff gathered during a pandemic that has taken almost 50,000 Texan lives. Thousands of snakes were brutally killed. But we can still stop this from happening in 2022.

Sign the petition and demand that the Texas State Legislature cancel all future Sweetwater Rattlesnake Roundups!

*This petition previously incorrectly targeted the Texas Parks and Wildlife Department, and has been updated to target the general Texas State Legislature.*

Care2
Thousands of snakes are gassed, starved, tortured, and killed at this event every year
SHARETWEET