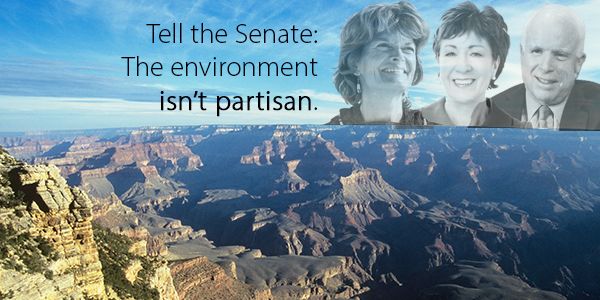 Tell the Senate: The Environment isn't Partisan - Defend Public Health and the EPA

Not content to simply allow mining waste to be dumped into streams, or patient enough to allow new EPA Administrator (and former sworn enemy of the EPA) Scott Pruitt to dismantle the agency from within, four Republicans in the House of Representatives have filed a bill to shut down the agency as of 2019.

It's clear that House Republicans have lost their minds. Unfortunately, I have no faith that our climate-denier-in-chief would veto this insane legislation if it made it to his desk, so we're going to need the Senate to step up.

That's right, we need the Senate to be the adults in DC. With the news out of the House and the new "leadership" at EPA, I could start a new petition every single day spotlighting a new insult and threat to our shared environment.

We need a bipartisan group of 10+ Senators to step forward and commit to blocking the roll-back of our environmental safeguards. Clearly, the EPA must be defended, but the larger principle of bipartisan leadership for cleaner air, water, thriving public lands, and action on climate change is well-worth protecting as well.

Sign the petition today, and urge your Senators to set partisanship aside and create a joint effort to stand together in defense of the EPA and our environment.

All Senators are encouraged to join together for the planet, but if 10+ clearly communicated their shared commitment to our environment and unwillingness to see our nation dragged backwards, our nation could begin a far more useful conversation about how to move forward.