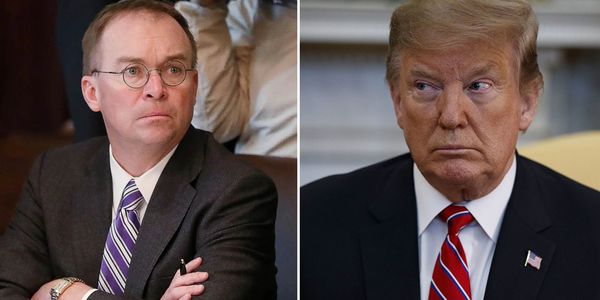 Hold Trump's Chief of Staff Mulvaney in contempt for defying a congressional subpoena!

A bogus term currently under review in federal court, the concept of absolute immunity dates back to the Nixon administration, and it goes far beyond acceptable measures of executive privilege, essentially suggesting that senior the White House officials cannot be investigated, much less charged, with any crime no matter the circumstances.

In other words, Mulvaney is arguing he is above the law.

Mulvaney has emerged – to the surprise of no one – as one of the key facilitators in the failed extortion attempt by the Trump administration with Ukraine, something he openly copped to during a press conference with three eloquent words – "get over it."

Working in concert with Rudy Giuliani to pressure Ukraine to manufacture dirt on Joe Biden – a scheme former National Security Advisor John Bolton referred to as a "drug deal" – Mulvaney was one of Trump's primary actors in the months-long scandal leveraging US aid and attention for partisan political favor.

The backbone of US democracy is rule of law. We don't have emperors. We don't elect kings. No one is above the law, including – and especially – those entrusted with stewarding the executive branch of government.

Hold Mulvaney in contempt of Congress for defying Congressional subpoenas. Mulvaney is fond of pointing out that "elections have consequences." So do subpoenas.