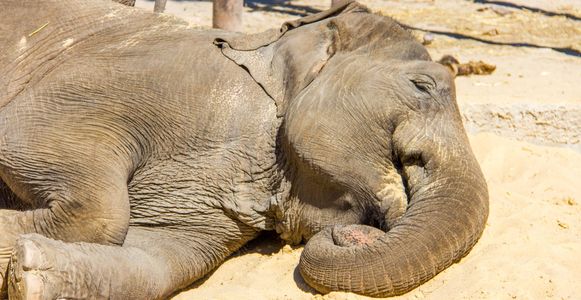 The world was horrified when, in 2019, Kanakota the elephant collapsed and died in the streets of Sri Lanka from exhaustion after being forced to endure group after group of tourists strapped to his back. Now, as we enter a new decade, we're learning that Kanakota was not an outlier but rather a symbol of a much larger evil. In 2019, 361 elephants were killed in Sri Lanka, and almost 85% of the death count can be attributed to humans.

Sri Lanka must update its laws to make the punishment for killing an elephant proportionate and enforceable! Sign the petition today.

The nature of these killings is just as shocking as the number. Elephants are tangled up and fried in electric fences, blown up with explosives, and even poisoned. Just last September, 7 elephants all perished when they consumed food that had been laced with poison and set out as a trap. Farmers and villagers think they have the right to murder these elephants, whose only crimes are wandering into "human territory" looking for food. And who can blame them when their habitats and food sources are disappearing and turning into that very same "human territory?"

This astronomical death count makes up almost 5% of the entire country's wild elephant population. Killing these magnificent animals is illegal, but the government has failed to enforce this law consistently. Part of the problem is that, technically, the penalty for killing an elephant is death. This is unenforceable within the context of the country's Flora and Fauna Protection Ordinance, not to mention ludicrous, cruel, and outdated. Sri Lanka must create an entirely new, enforceable, and proportionate punishment for the slaying of elephants.

This must happen now. Sri Lanka's Parliament has a history of dragging its feet when it comes to the protection of animals. The Animal Welfare Bill, the country's first attempt to update animal cruelty law since 1907, gained Cabinet approval in 2016 and yet has stalled and languished in Parliament ever since. This is not a good sign.

Please sign the petition and urge Sri Lanka's government to act immediately and pass new, fairer, and enforceable punishments for murdering elephants.
Sign Petition
SHAREShare this petition with friends!TWEETEMAILEMBED
Sign Petition
See more petitions:
You have JavaScript disabled. Without it, our site might not function properly.