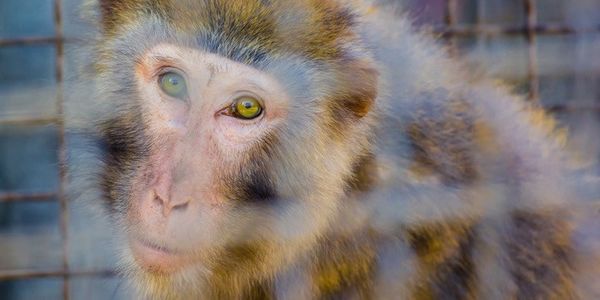 A University's Laboratory Dehydrated Captive Monkeys Until They Had Sunken Eyes.

Experimenting on monkeys is still a common practice throughout the U.S. - and that includes at prestigious universities like the University of California at Berkeley. Sadly, being locked up and tested on aren't the only hardships these poor creatures face. They're also routinely neglected and mistreated.

Official inspectors with the U.S. Department of Agriculture (USDA) recently discovered that staff at UC Berkeley's labs have been neglecting captive macaque monkeys to the point of intense dehydration.

Sign the petition to demand justice! These monkeys deserve to live the rest of their lives in peace and comfort at a reputable sanctuary instead.

When inspectors arrived at the university's facilities in May 2022, they found multiple animals who were so badly dehydrated, they were no longer urinating - and in some cases no longer eating. One had been so badly parched, it had developed "sunken eyes."

Even worse, this wasn't an accident! Staff at Berkeley knew their monkeys were suffering. Months beforehand, veterinarians checked on the monkeys - twice - and both times discovered that staff were improperly caring for the animals. Vets even retrained the lab staff on following proper protocols, monitoring the monkeys' water levels, and providing them with the adequate sustenance they needed. But when they came back to recheck, nothing had changed! The monkeys were still horribly dehydrated.

By the time USDA inspectors came through, the UC Berkeley lab staff had had ample opportunities to learn from their mistakes and correct them. But they apparently chose not to. Now Berkeley has released a statement claiming its staff have corrected all problems and the monkeys are fully recovered. Why should we trust or believe them? They didn't fix these massive mistreatment problems earlier this year, even after staff were retrained and warned multiple times. Why would this time be any different?

Dehydrating and neglecting captive lab animals like this is a crime against U.S. law. All laboratories are required to adhere to the Guide for the Care and Use of Laboratory Animals, which mandates proper food and water supplies. It also states that "Animals must be observed on a daily basis, with any issues being reported promptly to the attending veterinarian or their proxy."

UC Berkeley clearly cannot be trusted to continue experimenting on monkeys. It failed to correct its mistakes on multiple occasions earlier this year, leaving helpless, powerless animals to suffer. It couldn't even be bothered to sufficiently hydrate the monkeys before USDA inspectors finally came through. There's no reason to believe staff at these facilities have suddenly transformed overnight.

After chronically dehydrating its captive lab monkeys for months, the University of California at Berkeley should lose its ability to continue experimenting on these intelligent, social creatures. Sign the petition to demand UC Berkeley send all its remaining lab monkeys to a reputable sanctuary!
Sign Petition
SHAREShare With FriendsTWEETEMAILEMBED
Sign Petition
See more petitions:
You have JavaScript disabled. Without it, our site might not function properly.

Care2
A University's Laboratory Dehydrated Captive Monkeys Until They Had Sunken Eyes.
SHARETWEET