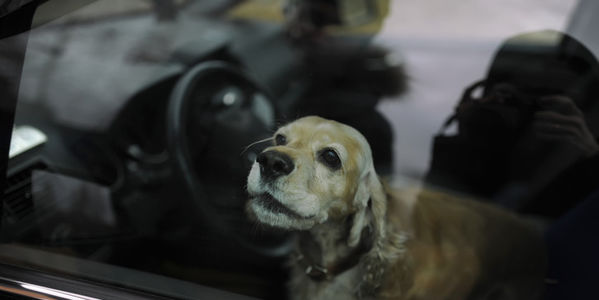 It's illegal to rescue a dog from a hot car in Australia!

The cells of the body quickly start to die, the brain swells causing seizures. Lack of blood supply to the GI tract creates ulcers. Dehydration leads to irreparable kidney damage. All these catastrophic events take place within a few minutes. If your dog's body temperature gets to 40°C or higher, heatstroke is the result. So why would you do this to your pet by leaving them in your car?

In a very short period of time, an overheated dog can suffer critical damage to her brain, heart, liver and nervous system with temperatures in cars potentially doubling in a matter of minutes. It can take just six minutes for a dog to die of heat exhaustion.

Recently in Perth, Australia, a Mastiff was pulled out of a car, but after suffering seizers died despite the rescuers best efforts. Another two dogs were rescued from cars where they were left for over 45 minutes. Their rescuer who called the RSPCA was willing to break the car windows if she had too.

But that could have ended badly for her. Breaking the window of a car to rescue a dog could land you in hot water. You could be prosecuted for the offence of 'intentional or reckless damage' which means a 5 to 6 year of imprisonment if found guilty. Not only are good Samaritans not protected, but the law around keeping dogs in cars is also vague, in fact, there are no specific laws forbidding it. Rather negligent pet owners may be prosecuted under general anti-cruelty laws, which can be difficult to prove sometimes.

This needs to change; bear in mind with death after only 6 minutes calling the RSPCA and the police may just not be an option. This is a life at risk, and it is a horrible death. Surely rescuing an animal under these conditions, and avoiding horrible damage and death should be rewarded and not punished. Good Samaritans must be protected, laws that allow good Samaritans to avoid prosecution must be passed, and laws must be changed and made more specific around holding pets in cars.

This is a no-brainer, this should not even be debated. We are shocked that these laws are not in place yet, and we must demand that they are put in place. How many more animals must die horrible deaths while trapped in a car, and how many more will die because it is illegal to rescue them?

Sign this petition with me, and let's demand that these changes are made. This will make a huge difference. There are over a thousand calls a year throughout Australia to rescue pets from cars. An average of about 700 in Queensland alone over the last few years. How many animals have died already, and how many can we save! Let's do this!

This is a call on two fronts. Add an enforceable law to protect pets and make it illegal to keep them unattended in vehicles of any type and to protect their potential rescuers. We need a law to protect good Samaritans from prosecution.

MPs for Queensland, we call on you to do the right thing. The laws around protecting animals from suffering and dying in vehicles and the good Samaritans that rescue them are woeful, inadequate and non-existent. We urge you to act, and to review current anti-cruelty laws for animals and to add more specific laws when it comes to animals in vehicles, and laws to protect their rescuers.

Care2
It's illegal to rescue a dog from a hot car in Australia!
SHARETWEET