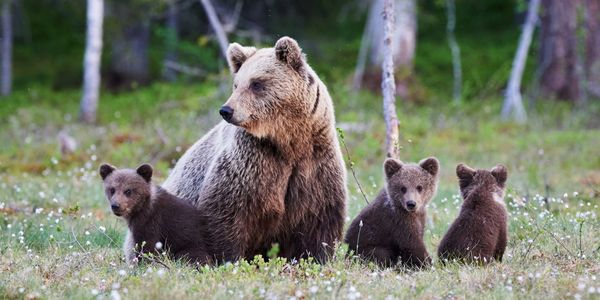 This New Mexico County Is Standing Up to a Federal Agency That Needlessly Slaughters Wild Animals!

The U.S. Department of Agriculture's Wildlife Services program has repeatedly been involved in instances of needlessly killing innocent wild animals like bears, wolves, mountain lions, and coyotes – all at the behest of the powerful livestock industry. While scientists, activists, and concerned members of the public have tried to emphasize the many nonlethal options that are available to officials when managing wildlife, the agency has continued to engage in reckless, murderous behavior, perpetrating violence against wildlife and damaging the precious ecosystems these predators play a role in. But one New Mexico county will no longer tolerate this bad behavior and has voted against renewing a contract with the USDA's Wildlife Services. This is amazing – and more counties must do the same!

Sign now to ask that other New Mexico counties follow in Grant County's footsteps and fire the U.S. Department of Agriculture's Wildlife Services!

Brutal leg hold traps that trap suffering, panicked animals for hours or even days in their sharp teeth. Poisons hidden in the wilderness for any animal to ingest and slowly die from. Rounding up and gassing animals, while chasing down others and shooting them to death. These are just some of the cruel methods of the USDA Wildlife Services.

So Grant County tried to prevent the violence as best it could – its contract with USDA Wildlife Services dictated that the department prioritize nonlethal methods of wildlife management, a clearly important clause to include, given Wildlife Services' history of slaughtering wild animals because of alleged "threats to livestock." In 2021 alone, nearly 2 million animals were killed by this agency – that's roughly 200 animals murdered every hour!

But according to reports, literally zero cases of nonlethal management methods were recorded in Grant County during the last contract period…so now the county is standing up for wild animals and firing the department.

There are many alternative strategies to managing wildlife that don't include slaughtering them, and these methods are well-documented. The USDA is well aware of them. Not only are they far more humane – they are statistically proven to be more effective! So there is no excuse for this pattern of violence against wild animals, and it clearly comes from a tendency by the agency to be more concerned with the bottom line of the livestock industry – which just wants to protect its cattle so that they can be slaughtered later for meat profits – than the health and well-being of local ecosystems.

Grant County has taken an amazing step in the direction of protecting wildlife by not renewing their contract with the USDA Wildlife Services. Now, it is time other counties in New Mexico do the same. Sierra, Catron, Luna, and Socorro counties all neighbor Grant County and could stand up for animal lives in the same way that other New Mexicans did. Sign the petition now if you agree!
Sign Petition
SHAREShare With FriendsTWEETEMAILEMBED
Sign Petition
See more petitions:
You have JavaScript disabled. Without it, our site might not function properly.

Care2
This New Mexico County Is Standing Up to a Federal Agency That Needlessly Slaughters Wild Animals!
SHARETWEET