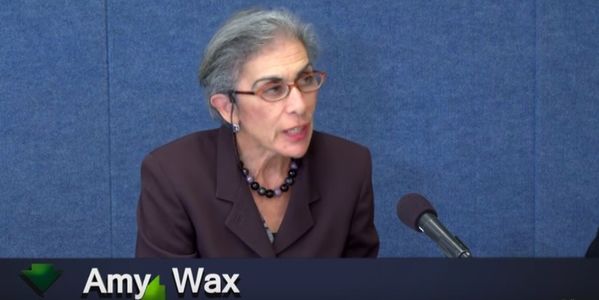 Amy Wax, a professor of law at UPenn, is no wilting violet when it comes to sharing her repugnant opinions. And she has just crossed the line again. In an online video exchange with fellow Professor Glenn Loury of Brown University entitled "Affirmative Action, Kavanaugh, and #MeToo," Wax questioned whether or not Christine Blasey Ford was exaggerating her trauma or if it even existed altogether.

Yet, she seemed to lament the fact that Kavanaugh's life had been ruined because of a "momentary act of recklessness." According to Wax, Ford's accusations were "stale" because they didn't happen yesterday. And she should have held her tongue instead of subjecting Kavanaugh to this "unfair" ordeal.

If only her sympathies lied with Ford and other victims of sexual assault rather than those who commit these disgusting acts of violence. In the age of #MeToo, there is no room for someone who believes that victims should keep their mouths shut and get over it.

When a university allows one of their professors to excoriate victims of sexual violence all while minimizing the trauma caused by the assailant, what kind of message is that institution sending to their students? In a country where 20% - 25% of college women are victims of forced sex, telling victims to keep it to themselves is not what we need. Such ignorance sets the #MeToo movement back rather than pushes it forward.

Wax's most recent comments can now be added to a library of disgusting views Wax has shared over the years. Last year she stirred controversy for saying that countries "ruled by white Europeans" were superior. And earlier this year, students rallied against her for suggesting that black students "don't perform as well as others."

Unfortunately, each outrage has been met with little action from UPenn staff. In response to the uproar over her comments about black students, UPenn Law Dean Ted Ruger simply barred her from teaching a few classes, without any real punishment.

Unfortunately, there might not be much UPenn can do since Wax is a tenured professor. However, if UPenn doesn't want to be represented by defenders of racists and sexual predators, the institution should take a stand and condemn Wax's vulgar, antiquated views. Someone like Wax, who holds such disdain for large portions of the school's student body, has absolutely no place being a professor.

But in the end, it's up to Professor Wax to take responsibility for her words and resign. Sign now to urge Professor Amy Wax to resign over her horrible comments about sexual assault survivors and black students.
Sign Petition
SHAREShare With FriendsTWEETEMAILEMBED
Sign Petition
See more petitions:
You have JavaScript disabled. Without it, our site might not function properly.