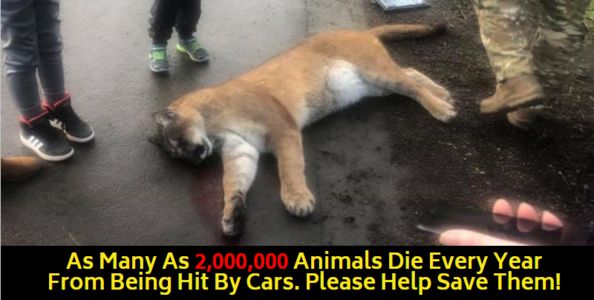 Save Wild Animals From Being Hit By Cars!

Eight mountain lions have been killed in the last two years on one stretch of highway... Imagine how many animals are needlessly killed every year.

Add your name if you want to see wildlife crossings over highways all over the nation, ASAP!

"A young male mountain lion was hit by a car and killed Sunday, March 8, while trying to cross the 101 Freeway in Camarillo, according to the National Park Service and the California Department of Fish and Wildlife.

"He is the eighth cougar to be found dead in the general area of the Santa Monica Mountains in the past two years.

"In an effort to prevent such fatalities and to increase the limited gene pool in the Santa Monica Mountains, a coalition known as #SAVELACOUGARS has raised $14 million to build a $60 million wildlife bridge over the 101 Freeway," reported The Los Angeles Daily News.

What a great idea!

But one crossing is not going to save animals everywhere...

Just think how many highways there are across the United States...

And how many people are driving on them every minute of every day...

And how many animals are trying to live their lives...

The numbers are staggering.

"The U.S. sees 1 to 2 million wildlife-vehicle collisions each year, according to an FHWA report," said one news source.

The worst part is, highway activity is creating isolated populations that cannot reach other members of their kind, and so they begin inbreeding.

This is terrible for the prospects of the local survival of the species.

And you know this is dangerous for humans too.

"Deer, cows and even squirrels are to blame for more than 26,000 injuries along the nation's roads each year, according to the CDC.

"Each year, about 200 people die in animal-related crashes out of the nearly 44,000 traffic fatalities nationwide. There were 247,000 crashes involving animals in 2000, the latest federal highway data available," reported NBC News.

ALL of these lives could be saved.

The solution is simple: wildlife crossings.

A wildlife crossing is like a highway overpass, except that it's for animals instead of vehicles. Some of them are built like underpasses, too.

Many nations are already doing it, and it's saving lives.

"Overpasses play a key role in the western portion of North America, where teeming wildlife corridors are intersected by long roads like the Trans-Canada Highway. Fences help direct the animals toward the safe passages.

"The use of underpasses is spreading, too. These passageways are usually compact, and so are especially helpful to smaller animals — water voles in London, badgers in British Columbia, pumas in Brazil — but in Kenya larger ones are even being used to assist elephant herds.

"They're also serving aquatic species: In Washington state, underpasses recently added to Interstate-90 are linking streams and wetlands back to the Yakima River, to the benefit of salamanders, reptiles, and fish, including the bull trout, a vulnerable species," according to Quartz.

So how do we make this happen?

"When a new transportation project is proposed on lands with wildlife habitat, officials managing wildlife in those areas are given notice and can request that engineers design for wildlife.

"However, there isn't a process or dedicated funds established to update existing roads with overcrossings," according to REI.

The good news is that there is already a Senate Bill in progress that would do this very thing.

The way forward is clear. We need this bill to pass.

That's why we're asking every single member of the Senate to support this crucial piece of bipartisan legislation, and save countless lives - both animal and human - from dying on America's highways.

Don't you want to see wildlife crossings all over the nation?

Then add your name to ask every single member of the Senate to support America's Transportation Infrastructure Act of 2019!

Care2
Save Wild Animals From Being Hit By Cars!
SHARETWEET