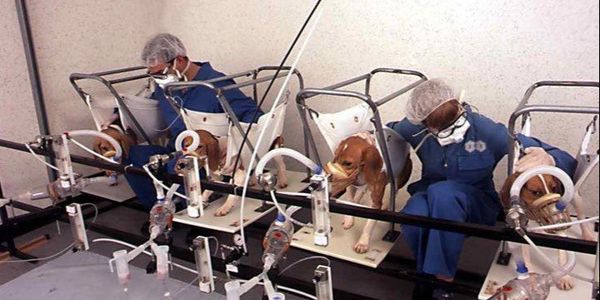 The lives of animals matter too!
Animals are such amazing creatures, which are vital to the world and how it runs. We need to love and care for these animals. They are exactly as we, and they don't deserve to go through torment, torture and harm; endangering their lives for products that will, in the end endanger ours lives as well. The majority of the population have known for decades that smoking cigarettes cause diseases in nearly every organ of the body, yet we still continue to manufacture these health damaging products, and continue to target harmless animals to conduct cruel, irrelevant lab tests on.
With immense research, I have found that many people don't even realize that animals are still being used for these tests; being forced to breathe in the cigarette smoke for up to six hours straight, every day, for as long as three years, or, for how long it takes for them to pass, due to internal complications. Even in the past, dogs and monkeys have had tubes attached to holes in their necks or have has masks tightly strapped to their faces, forcing the smoke into their lungs. In some other tests; smaller animals like mice and rats, have had cigarette tar applied directly to their bare skin, to induce the growth of skin tumors, and skin cancer. Animal tests are not only extremely cruel, but are irrelevant to the health of humans. Each animal has a different system, which put forth different reactions at different times, with different strengths and effects. Humans aren't exposed to cigarette smoke as directly, in the same time frame and manner as the animals that are being tested. Creating the irrelevance of these tests, because they aren't realistic.
Many animal activists, and privately owned organizations have been pushing to end the continuous experiments on animals for more than a decade. The population of different species of animals are slowly declining due to hunting (both legally and illegally), illegal killing for trade (furs, horns, ivory, skin, and more), keeping animals in unliveable captivity, the melting of the ice, the changing of climate, animal cruelty, and tobacco testing. All in which are an unnatural decline to the environment, breaking the natural growth and decline in population that should only be controlled by the other animals. That is the way it is supposed to be, exactly how it was before humans came along and started destroying their habitats and killing off each individual species. Without humans, the animal populations would be thriving, because there would be no human beings there to damage it.
So many species are endangered, and are becoming endangered because of humans. Yet many people don't realize that our world is going to die if we continue the way we are, without fighting to save the animals. Once they are all gone, the human population is going to diminish until we are no more, because the animals are what sustain our life here on earth. Earth has just become something that many take for granite. We should be putting the money used to create lab experiments towards helping people with tobacco addictions so that harm to animals can end.
With your help I believe the voices of the animals can finally be heard. Please help to ban tobacco product and ingredient testing on animals. Their lives matter too.
Sign Petition
SHAREShare this petition with friends!TWEETEMAILEMBED
Sign Petition
See more petitions:
You have JavaScript disabled. Without it, our site might not function properly.