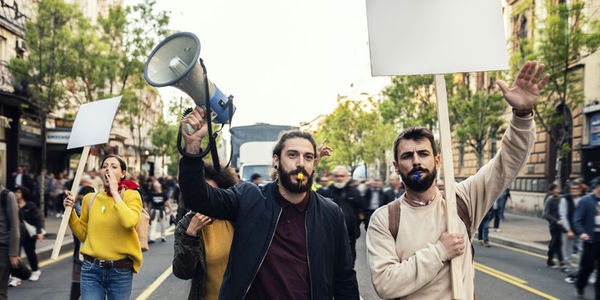 War is Not The Answer - Defund Trump's Temper Now!

The first thing Donald Trump did in the new year is bring the United States to the brink of war. On Friday Jan. 3, he assassinated Qasam Soleimani, a top Iranian general serving in Iraq. Soleimani was not a good guy. For years, he's helped militia groups aligned with Iran harass and attack American forces and our allies. He had blood on his hands and deserved to be held accountable for the people he's killed and the lives he's upended.

But none of that is justification for committing an act of war that puts the lives of thousands of Americans and millions of Iranians, Iraqis and others in the Middle East in danger. Already, Iran retaliated by bombing a military base that houses U.S. and Iraqi soldiers.

Sign the petition now to demand Congress passes a bill to revoke funding for this needless war!

This is exactly what we feared Donald Trump would do as commander in chief. He's been a blustering, lying hothead his whole life. That's all well and good when the biggest decision you have to make is who is "fired" from The Apprentice. But now, he holds the safety of millions of people in his hands, and he's shown he's the dangerously impulsive blowhard with a fragile ego we feared.

If this conflict escalates into full blown war, it is regular people who will pay the price. War rips families apart, devastates communities and hobbles economies. There are 81 million people in Iran, people with families and jobs and hobbies. They do not deserve to die just because we have a leader with the emotional temperament of a toddler. We cannot let Trump lead us into another misguided war that will destroy the lives of innocent people.

In order to stop him, we need Congress to do its duty. Right now, the Trump Administration is coming up with weak explanations about why killing Soleimani and provoking Iran is legal under an authorization of military force passed in responses to 9/11. It's a tired playbook presidents have used for almost 20 years as carte blanche to order attacks without having to ask Congress to declare war.

But Senator Bernie Sanders and Representative Ro Khanna introduced a bill that would bar federal funds from being spent on military action with Iran. Trump and his cronies have shown they will stretch the law to do what they want. But no money to fight Iran is a legal red line even they can't cross.

If we want to stop barreling towards war, we need to start by cutting off funding. Tell your members of Congress to support this bill and defund any military efforts against Iran.