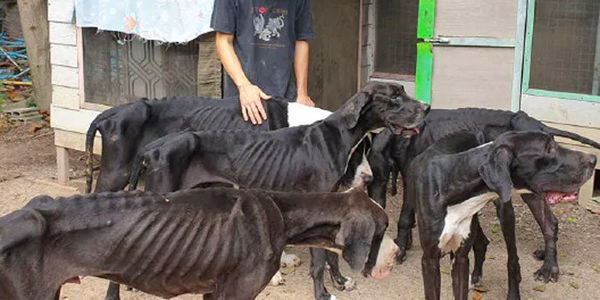 A Woman Starved Thirteen Dogs, Locked Them in Filthy Cages, and Left Them to Die!

If it weren't for a concerned relative, who knows how long it would have taken for rescue organizations to learn about thirteen severely abused dogs.

A woman in Lat Lum Kaeo in central Thailand was running a breeding farm full of Great Danes, hoping to produce enough puppies to sell at a profit. But she encountered unexpected financial difficulties and realized she could no longer afford to feed or take care of the dogs — at the time totaling 16 animals.

So what did she decide to do? Did she take them to a rescue group or give them away to caring families? No. Instead, she locked each one of the animals inside metal cages, with no food, walked away, and left them behind to slowly and helplessly starve to death.

By the time rescuers showed up, the sight was gruesome. The Great Danes were starving so badly, they'd become completely emaciated — every single one of their bones could be seen clearly outlined and protruding from under their skin.

Unfortunately, not all of the animals made it out alive. A mama dog and her two pups died from the extreme neglect and mistreatment. When the owner's relative realized this, they immediately called the police.

Luckily, for the remaining 13 animals, there was a happy ending. Animal organizations shared photos of the skin-and-bones dogs on Facebook, and the posts spread quickly, reaching tens of thousands of people. In fact, they went so viral that the photos even reached the eyes of Thailand's King Rama X, who noticed the photos. When the King saw what was going on, he quickly adopted all 13 dogs, and promised to pay for their ongoing care and veterinary treatment.

We're grateful and glad that authorities stepped in when they received the call, but it doesn't exonerate the woman who owns the dog-breeding farm and abandoned these innocent animals to die. She must not be allowed to desert her animals in such a heartless way.

Sign the petition to demand that Thai officials shut down her despicable breeding farm and charge her with animal cruelty!
Sign Petition
SHAREShare this petition with friends!TWEETEMAILEMBED
Sign Petition
See more petitions:
You have JavaScript disabled. Without it, our site might not function properly.

Care2
A Woman Starved Thirteen Dogs, Locked Them in Filthy Cages, and Left Them to Die!
SHARETWEET