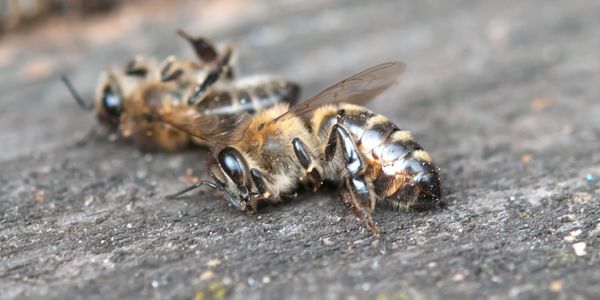 Last month, five million honeybees -- 800 pounds inside 200 crates -- bound a Delta Airlines flight from Sacramanto, California. Their cousins had done this many times before. They were heading for Seattle, Washington and then on to Anchorage, Alaska. There, they'd join the nurseries and orchards of more than 300 Alaskan beekeepers to help with pollinating fruiting plants.

Or at least, that was the plan. Until Delta Airlines rerouted the bees to a completely different location and left them to starve and broil to death on a hot airport tarmac... for hours.

Sign the petition to demand justice for these pollinators, which Delta thoughtlessly neglected to death!

Since pesticides have been mass-murdering bees all over the world, these types of commercial shipments are now essentially mandatory for farms, nurseries, and orchards in many places. Without bees, pollinated crops will simply fail to create our produce, leaving farmers with barren yields and us consumers without apples, oranges, blueberries, watermelons, almonds, and more.

Delta Airlines had handled this type of shipment many times before. It knew the drill: keep the bees cool, with temperature control, and make sure they're fed. Take care of them, and get them to Alaska fast. And in the past, things worked out fine.

This time was different. It all started with Delta choosing to send the bees -- not to Alaska, but in the exact opposite direction, to Atlanta, Georgia. That's where nearly five million bees met their captive deaths. Not only did Delta reroute the helpless animals, but it also added full days to their journey. They were originally supposed to arrive in Alaska on a Friday. But by Sunday, the situation had taken a heartbreaking turn.

Delta personnel removed the bees from their temperature-controlled cooler and stacked their hundreds of crates out directly in the Atlanta sun, where it was upwards of 80 degrees outside -- far too hot for the little captive creatures. Then, it abandoned them on the tarmac. The Alaska beekeeper who had orchestrated previous shipments was terrified for the insects' lives and quickly contacted East Coast beekeepers, asking for their help. One man in particular rushed to the rescue, but it was already too late for one-quarter of the bees. They'd died from being baked alive in the heat, and starving. And more kept dying by the minute. By the end of Sunday, very few bees remained alive at all.

Those that survived found new homes with Georgia-based beekeepers and nurseries, but this mass die-off was an apocalyptic event for a huge bee community.

Delta has supposedly communicated its apologies to the Alaska beekeeper, who is filing a reimbursement claim with the corporation after its epic, deadly mishandling. But millions of lives have still been lost. Delta must immediately commit to helping bees by donating to bee-protecting projects! An apology is simply not enough. The pollinators of the world need Delta to take real responsibility. Sign the petition if you agree.
Sign Petition
SHAREShare this petition with friends!TWEETEMAILEMBED
Sign Petition
See more petitions:
You have JavaScript disabled. Without it, our site might not function properly.