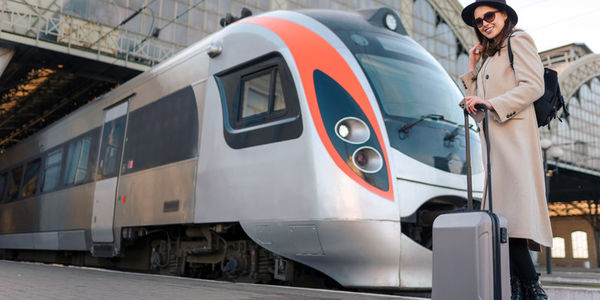 Trains could save us from climate change, but Big Oil doesn't want that to happen

The transportation sector in the U.S. — planes, trains, and automobiles — makes up the largest chunk of the country's greenhouse gas emissions, meaning it is the U.S.'s single largest contributor to climate change. We all have to get around somehow. But interestingly, planes and automobiles (trucks and cars) are the most major polluters in this category. Trains, on the other hand, are relatively much more eco-friendly. And they could be the answer to much of our carbon footprint woes.

Yet the U.S. has scorned trains for generations, as part of Republican-led quests for "smaller government" and increased subsidies for oil and gas companies. Why fund trains when you can give your dirty fossil fuel friends more profits for their petroleum-lined pockets?

But high-speed rail is the future of eco-friendly, affordable, accessible transportation. It hits our social justice needs on a variety of fronts. It can increase mobility for impoverished families who can't afford a car. It can connect disparate areas of the country that currently take dozens of hours to move between.

And it can help the U.S. fight back against climate change.

Sign the petition to demand that President Joe Biden's administration invest in a 21st century, high-speed, eco-friendly rail system for the whole country!

Right now, the U.S. is undeniably a car-oriented society. Starting in the 1950s, interstate highways became the main form of transportation, with the federal government investing huge amounts of money in this infrastructure. Since then, Big Oil corporations have lobbied hard to keep America fixated on this dirty method of transit, beating back any alternative possibilities. As Andy Kunz, the president and CEO of the US High Speed Rail Association, says: "We were up against this nonstop anti-rail propaganda machine cranking out lies and myths — rail is yesterday's technology, all this nonsense — from these think tanks funded by oil companies and car companies and the road industry and the aviation industry."

While the U.S. federal government does contribute towards our only real passenger rail system, Amtrak, that contribution is pitiful in its amount — especially when compared with the subsidies handed to airlines, car manufacturers, and fossil fuel corporations every year.

As a result, the U.S. and in fact the whole world have been paying the price in the form of rising global temperatures, more extreme weather, and continued dependence on the fluctuating prices of oil and gas. Trains, on the other hand, run on electricity. This can be sourced from polluting methods — or it can also be sourced from renewable sources like solar, wind, and hydro power.

The U.S. is far behind in this game, and it's frankly embarrassing. Most European and Asian countries already have high-speed rail systems that are fast, efficient, and Earth-friendly.

If the United States were to develop something similar, travelers would be able to reach Chicago from New York in just 4 hours. Right now, it takes 20 hours via current older, slower trains.

We're asking the new President, train-loving "Amtrak Joe," to make a commitment to help the U.S. create a greener, more equitable future by developing a high-speed rail system for all Americans. Sign the petition if you're ready for this more sustainable future!
Sign Petition
SHAREShare With FriendsTWEETEMAILEMBED
Sign Petition
See more petitions:
You have JavaScript disabled. Without it, our site might not function properly.

Care2
Trains could save us from climate change, but Big Oil doesn't want that to happen
SHARETWEET