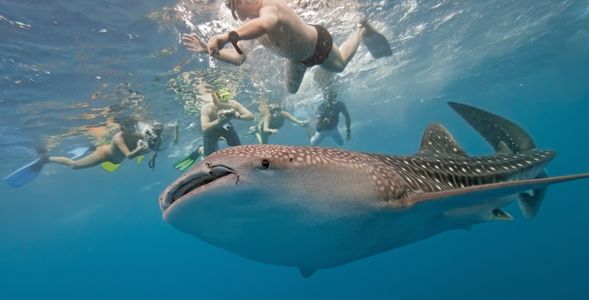 The whale shark — the world's largest fish — is under threat. Its numbers are in decline and it is up to the global community to implement laws that ensure their survival.

That's why it is protected by many countries around the world, including in Mexico where it is considered a threatened species. During the summer months, whale sharks swarm the waters near the Mexican Caribbean coast. Their presence brings tens of thousands of people hoping to catch a glimpse of these gentle giants. But the boom in whale shark tourism during the summer could potentially put them in danger. So the lucky few who do get to swim with them are given strict regulations as to how to behave when they are in the water.

Don't go in the water with sunscreen, you must always go with a certified guide, keep your distance and never ever touch one.

But those warnings weren't heeded by two careless men near one of the Mexican islands in the Caribbean. In photos that have recently gone viral, the two men assumed to be a guide and a tourist, seemingly stand up on top of a whale shark that's close to the surface and proceed to ride it as if it were a surfboard. With no regard for their safety or that of the sharks, they straddle the shark's back while posing for photos.

Whale Sharks like other sharks must keep moving to breathe. Although they are huge, the fish are extremely fragile, and any type of human contact can lead to injury which could quickly lead to their death.

These two men put this incredible animal's life at risk for a photo. They need to face the consequences and the guide should never be allowed to give tours again. Tour guides supposedly know the laws that protect endangered marine species, but this one decided to ignore them and allow his clients to treat the fish like a plush toy.

Mexican authorities should make sure to find the tour guide and tourist and ensure they pay a price for putting the whale sharks at risk. Sign the petition and encourage Cristopher Gonzalez, regional director for the Yucatan Peninsula Regional Commission to take action now.
Sign Petition
SHAREShare this petition with friends!TWEETEMAILEMBED
Sign Petition
See more petitions:
You have JavaScript disabled. Without it, our site might not function properly.