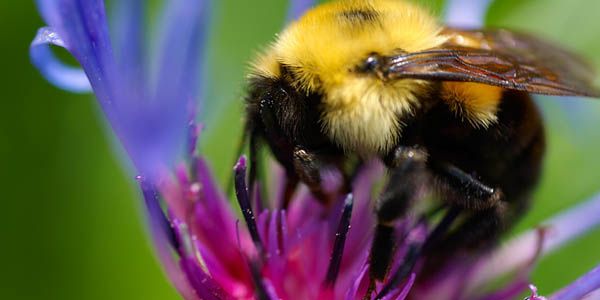 BEE Protective Pesticide-Free Zone Declaration For Lawns, Landscapes and Pollinators! Pledge your organic and pollinator-friendly acreage and sign the Pesticide-Free Declaration! Pesticides are hazardous to health and the environment, and are unnecessary to have a beautiful yard and landscape. Pesticides are also toxic to bees and other beneficial pollinators. However, you can create pollinator-friendly, organic landscapes by eliminating pesticide use and planting pollinator-attractive habitat. Pledge your yard, park, garden, or other community or business-managed green space as organically managed and pollinator-friendly. Indicate how many acres (or what fraction of an acre) you can declare as organic and how many acres you would like.

OceanBlueProject, the Corvallis-based company involved in mycoremediation, is involved with Saving America’s Pollinators Act HR 2692, a federal bill aimed at suspending use of the worst pesticides and also directing the EPA to perform deeper evaluation of the pesticides’ impacts on pollinators.

OceanBlueProject and their Sustainability Team will be visiting the Corvallis neighborhoods with a pesticide free Corvallis, "Bee Protective" door-to-door campaign, to help lower pesticides used throughout the city. OceanBlueProject partnered not only with Beyond Pesticides, a non-profit from the state of Washington, and Toxic Awareness Body of Oregon, with their main focus being A Safe School Route, campaign to help children have save travels to and from school, safe from Pesticides and toxic free bus route. Protecting our lawns and gardens will also help protect our Oceans, "Let’s not forget, everything runs downhill, right into our rivers, then the Ocean". Our goal is to bring awareness and eliminate this run off before it reaches the Willamette River and beyond," said Richard Arterbury.

Bees and other beneficial pollinators are disappearing at alarming rates. While we may not know the exact cause of the disappearance, we do know that some pesticides are contributing to their decline. We also know there are simple things each of us can do to help combat pollinator loss. That’s why we have launched the Bee Protective Campaign. By making simple choices—such as avoiding pesticide products that contain neonicotinoids and choosing to plant pollinator-friendly plants—we can help address this crisis. If you would like to become involved with OceanBlueProject visit Pesticide Free Corvallis to pledge your lawn or garden space to become pesticide free. more information: about Our Bee Protective campaign: http://www.oceanblueproject.org/pesticide-free-corvallis.html Beyond Pesticides link:

Bees are responsible for pollinating one in three bites of food we eat...and they're in trouble. Since the mid-1990s, they've been dying off in droves around the world. Colonies have been mysteriously collapsing with adult bees disappearing, seemingly abandoning their hives. This phenomenon — known as Colony Collapse Disorder, or CCD — is likely caused by a variety of interacting factors, including pathogens, loss of habitat and increased exposure to systemic and other pesticides. Policymakers have yet to make pollinator health a top priority, and current regulations don't provide adequate protection for bees. But a groundswell of concerned citizens, gardeners and beekeepers is building to protect bees. Join the movement! Take the pledge to provide a honey bee haven with access to pesticide-free food, shelter and water. It doesn't take much space — a few containers of the right kinds of plants tucked into your garden, on a balcony or front stoop, will get you started. OceanBlueProject, Pesticide Free Corvallis: