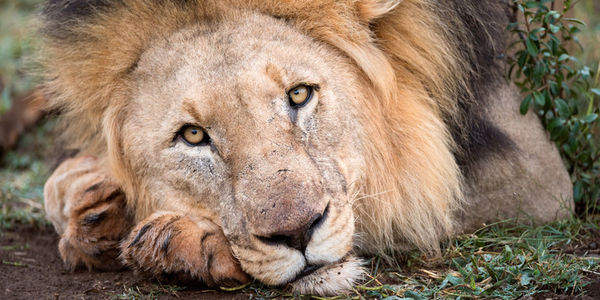 A Poacher's Trap Nearly Severed This Lion's Paw, Until Heroic Veterinarians Saved Him

Heroes in Kenya recently saved a lion who was in the process of watching his paw get cut off. The lion had been strolling through a thicket - and didn't see that hunters had laid out a wire snare trap. When he accidentally stepped right on the trap, it clamped around his paw. The more he fought to escape, the tighter the wire became, until it began cutting into his flesh.

Unable to free himself, the lion laid in the foliage, wounded and afraid.

The wire had wrapped itself around the lion's paw so intensely, veterinarians had to cut the metal with bolt cutters. And sadly, the Vet Units often carry bolt cutters around because they frequently run into situations like this. Sometimes, the traps aren't around paws, but encircle lions' necks instead.

After removing the snare trap, veterinarians gave the lion antibiotics, cleaned his injuries, and ensured he was on the road to healing. This particular animal was lucky because he will live to have another day. But many other lions are not as lucky - and that's because hunting and poaching are running rampant.

Poachers set traps like this in order to disable and eventually kill the wild animals, and it's a slow and painful way to go. Eventually, the lions are skinned and butchered and their body parts are sold off in the bushmeat trade. The organization Lion Aid estimates that the criminal bushmeat trade brings in profits that are much larger than profits from the illegal ivory trade.

Because there is so much money-making potential, poachers set out hundreds of traps in just one area alone. Across Kenya, that has added up to tens of thousands of snares. This is dangerous for the innocent animals and their overall species survival - and it's also dangerous for humans who could step on traps, or wind up eating meat that is not safe for consumption.

That's why organizations like the Sheldrick Wildlife Trust and Lion Guardians, as well as agencies like the Kenya Wildlife Service, are so important. Without the wildlife rescuers on their teams, countless animals would be left to suffer and die harrowing deaths. These heroic groups deserve more international funding, to help them continue their incredible work!

Sign the petition to demand that international agencies like the U.N. and countries like the U.S. provide additional funding for the teams at Sheldrick Wildlife Trust, Kenya Wildlife Service, and Lion Guardians! They deserve our help and support.
Sign Petition
SHAREShare With FriendsTWEETEMAILEMBED
Sign Petition
See more petitions:
You have JavaScript disabled. Without it, our site might not function properly.