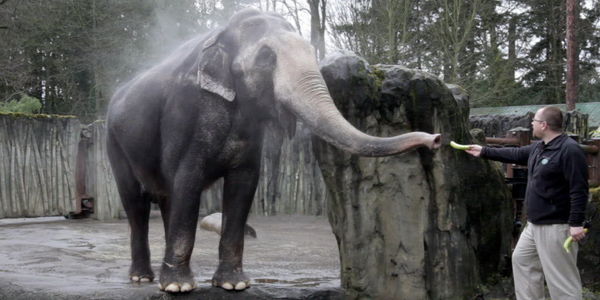 Free Packy the Elephant From 54 years of Captivity in The Oregon Zoo!

The heartbreaking story of Packy begins when he was born at the Oregon Zoo in 1962 to his Mother Bella. Packy has spent 54 years behind bars.

Packy is the oldest male Asian elephant in North America, and he is in extremely poor health. He was diagnosed with tuberculosis in 2013, and is still undergoing treatment. Packy is also plagued by cracked nails, lesions, and abscesses on his right foot. Records reveal that he receives Ibuphofen and Acetaminophen for lameness, and near daily attempts to manage the poor condition of his feet.
Packy has recurring abscesses and lesions on the left side of his head caused by lying on a concrete floor for extended periods of time. He also has a hygoma - a soft fluid-filled subcutaneous swelling over a bony prominence - on the right side of his head.
Due to his failing health, Packy is no longer visible to the public. He is said to be suffering alone in his enclosure, simply waiting to die without ever knowing freedom. His sad existence is a reminder of why it is inhumane and unethical to breed elephants in captivity, denying them of everything that is innate to who they are as wild animals.
The Oregon Zoo has taken a majestic animal and turned him into a tragedy. After 54 years of continued suffering, Packy deserves to spend his last years in a sanctuary where he would be free from bars. But the zoo honestly thinks that keeping him in captivity is what is best for Packy. No, it's what's best for the zoo, and the greed that blinds their common sense, compassion, and love for this beautiful elephant. Their selfishness has destroyed Packy. Mentally, emotionally and physically. All for human entertainment and financial gain.
In the end, Packy’s life will not be a contribution to conservation, but a testament to the tragedy of captive breeding, and the deadening existence of exploitative zoo captivity.

Please sign this petition demanding that the Oregon Zoo release Packy the elephant to the Performing Animal Welfare Society's (PAWS) sanctuary in California. There, he would have the opportunity to roam acres of natural habitat, play in a pond, forage for fresh vegetation, befriend other elephants, and enjoy a full, healthy, and enriched life.

Thank you very much.
Sign Petition
SHAREShare this petition with friends!TWEETEMAILEMBED
Sign Petition
See more petitions:
You have JavaScript disabled. Without it, our site might not function properly.

Care2
Free Packy the Elephant From 54 years of Captivity in The Oregon Zoo!
SHARETWEET