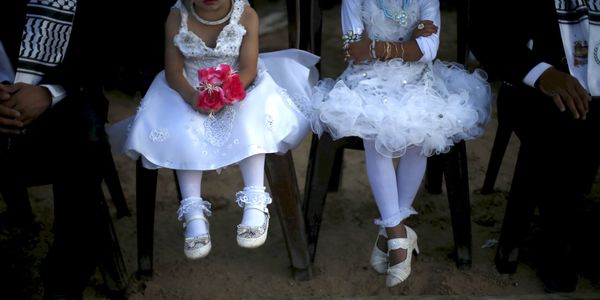 I'm a refugee living in Turkey. Because of that, I'm painfully aware that child marriages are a serious and growing problem among Syrian refugees. In fact, I've met many young girls who were forced into early marriages, who want to make sure other children never have to go through what they've gone through.

Parents often forcibly marry off daughters as young as 13 years old because their families are facing extreme poverty, and they simply can't afford to take care of their children. This year, the United Nations reported that roughly 70% of Syrian refugees are living below the poverty line in their respective host countries, making families desperate to give their children a better future. And all too often, parents see early marriage as the best way out.

But marrying off young children doesn't make their situations better. Instead, they're more likely to be subjected to rape, domestic violence, and heavy responsibilities that they are not prepared for -- including early motherhood.

Child marriage isn't legal in Turkey, but religious judges and even local sheikhs have been known to authorize early or forced marriages anyway. This has to change. These children will likely never have a real chance to love or be loved by their partners. Most of these child brides will never finish their schooling, and will drop out as soon as they are married, which further limits their opportunities in life. They are not even given the right to choose their own fates. How can a child become a mother?

The government of Turkey must ensure that young refugee children are not forced into early marriages, and must crack down on these marriages when they occur. We ask the government to investigate child marriages among refugees and to enforce their laws against underage unions.

By signing this petition, you are helping to protect the future of young girls everywhere. The more people who sign and share, the louder our voices will be, and the more Turkish officials will have to listen!

The crisis in Syria and subsequent influx of refugees into Turkey and other neighbouring countries has caused a dramatic rise in the number of child marriages.

Child marriage increases dramatically in emergencies due to increased poverty levels and a need to reduce household expenditure as well as parents wanting to protect their daughter’s honour and avoid sexual harassment and violence in an increasingly fragile environment.

A UNHCR survey conducted in 2014 revealed that the average age of marriage for Syrian refugee girls in Turkey was between 13 and 20 years with many respondents saying if they had the money, they would not have resorted to marrying off their daughters at such a young age.