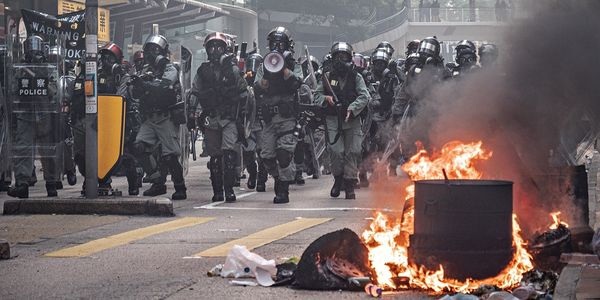 A unanimous vote in the Senate? They were already rare before, but during the Trump era, you're more likely to see pigs fly than see Congress agree on something. Yet, every single member of the Senate just voted to pass the Hong Kong Human Rights and Democracy Act. 417 members of the House voted in favor of the law as well - just one voted against it.

As the pro-democratic protests in Hong Kong continue, American politicians have become increasingly worried about the police's abuses of protestors, which they have seen on TV. Lawmakers view the bill as a necessary response to the violations committed by Chinese and Hong Kong police. When enacted, it will apply sanctions on officials responsible for human rights abuses during the Hong Kong uprising.

Despite nearly unanimous support for the law, President Trump has suggested that he will veto the bill. Trump believes that any legislation in support of Hong Kong protestors would get in the way of a trade deal he's negotiating with mainland China. Of course, we wouldn't even need the deal if Trump hadn't started his unnecessary trade war in 2018. Now, he wants to use the fundamental human rights of the Hong Kong people as a bargaining chip to end it.

To defend his two-faced position on the HK Human Rights and Democracy Act, Trump gave this nonsensical explanation to Fox News:

Does he, though? When our president would not only go against the will of Congress but also against the freedoms of more than 7 million people, can he really claim to stand for freedom?

The HK Human Rights and Democracy Act is a powerful tool to put pressure on China to stop its human rights abuses on the island of Hong Kong. A law like this is needed now more than ever as police brutality against Hong Kong citizens has grown ever more frequent.

Tell Trump not to give up on American values just to appease a bully. Sign and ask President Trump not to veto the HK Human Rights and Democracy Act.

Photo credit: Studio Incendo
Sign Petition
SHAREShare this petition with friends!TWEETEMAILEMBED
Sign Petition
See more petitions:
You have JavaScript disabled. Without it, our site might not function properly.