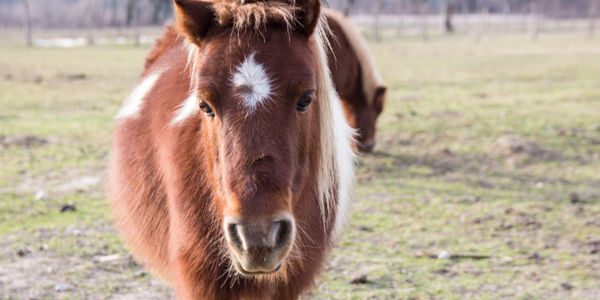 These Stables Were So Short, Gentle Ponies Were Forced to Lay in Their Own Excrement

Authorities in the UK recently discovered multiple sweet ponies "imprisoned" in a situation that was so bad, rescuers had to literally break down walls and wade through poop to free the animals.

Sign the petition to call for a public awareness campaign to teach people how to properly care for their horses, ponies, and other outdoor animals!

For years, a couple had locked nine animals into stables that were so small, they were no more than a tiny shelter for children or hobbits -- and a dilapidated one at that. The ceiling was so low, the ponies could not stand up, and were forced to simply lay in their own filth and feces. At least one pony's back could even be seen sticking up through the ramshackle "roof" made of deteriorating wooden planks.

It was clear the humans in charge had not been caring for the animals. Rescuers said the couple had failed with "every basic aspect" of caring for the animals' welfare. In fact, investigators believed the nine ponies may have never even been allowed out of their low dwellings during their whole lives.

By the time officials arrived, the small horses had sores on their bodies, matted fur, and hooves that were so overgrown, it looked like they were wearing overdone caricatures of Dutch clog shoes. The short, make-shift stables became filled with the animals' excrement. And ultimately, the dwelling became so crammed, rescuers could not actually open its doors to free the creatures.

British authorities have since banned the couple from owning animals ever again, which is a good start. Clearly these individuals cannot be trusted to adequately care for other living beings -- particularly animals. But it should never have been allowed to get this far.

British animal welfare and protection services must undertake a public education campaign to teach humans how to treat their outdoor animals, including horses and ponies! Sign the petition to help protect future animals!
Sign Petition
SHAREShare With FriendsTWEETEMAILEMBED
Sign Petition
See more petitions:
You have JavaScript disabled. Without it, our site might not function properly.

Care2
These Stables Were So Short, Gentle Ponies Were Forced to Lay in Their Own Excrement
SHARETWEET