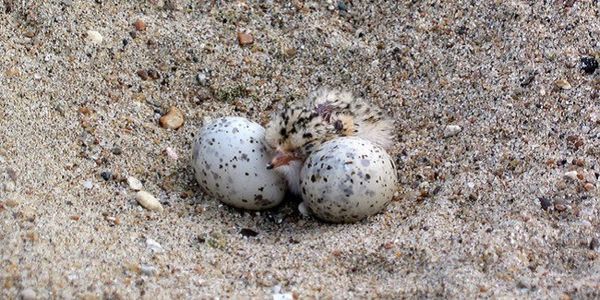 On the Fourth of July, 17 boats docked on tiny Sand Island off the coast of Alabama. The large group of tourists wanted to play volleyball on the beach. However, nests containing bird eggs were in their way.

Instead of finding another place to play, the tourists shooed away the adult birds and scooped the eggs out of the nests. They made a small dome of sand and decoratively arranged the eggs around it, according to a wildlife expert.

By removing the eggs from their nests, these heartless tourists may have killed hundreds of federally protected least tern birds just so they could play volleyball.

Least terns lay their grape-sized eggs inside shallow holes they dig in the sand. Female birds sit on these nests to keep the eggs cool. Exposed to the brutal summer heat, the eggs can literally be baked – which is what happened to the eggs moved by the tourists. Some of the eggs had cracks, indicating that the chicks were trying to peck their way out.

These birds are protected under the Migratory Bird Treaty Act, which makes it illegal for anyone to take their eggs without a federal permit. The penalty is $15,000 and up to a year in jail.

The U.S. Fish and Wildlife Service (USFWS) is investigating this tragedy. No arrests have yet been made.

Please sign and share this petition urging the USFWS to charge those who moved the eggs not only with violating the Migratory Bird Treaty Act, but with animal cruelty – to the fullest extent of the law.