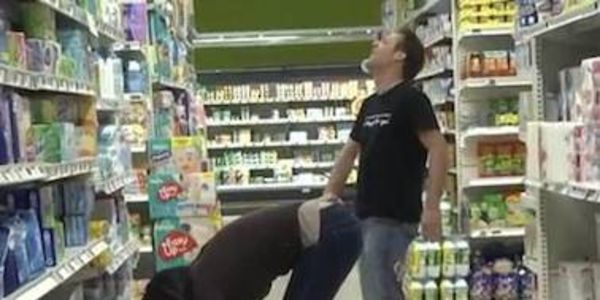 French YouTube "comedian" Remi Gaillard has released a "Free Sex" video, which shows him simulating sexual acts upon unsuspecting women on the street -- women who did not consent and are just trying to go about their day, grocery shopping, reading a book, etc.

This video glorifies rape, but YouTube has not removed it. Simulating non-consensual sex acts on random women in the street should NOT be tolerated.

YouTube has simply flagged the video as "age-restricted" content -- and the site has a bit of a history of refusing to remove videos that depict harassment of women.

Despite widespread outrage, YouTube also refused to flag or remove Simple Pickup's channel, which shows men harassing and groping women on the street in the name of getting dates. Apparently YouTube has also deemed Remi Gaillard's video okay, even though it also upholds rape culture.

Harassment is against YouTube's community guidelines, but the wording makes it unclear whether or not this behavior is okay to depict in a video, or just to participate in on the site itself:

Sign this petition to tell YouTube to take harassment against women seriously, and to remove channels that depict gender-based harassment in public spaces!

Another way to take action: Click on the video and select "Report video." Choose "Hateful or abusive content" and then "Abusing vulnerable individuals."

Harassment against women is not okay and should not be tolerated on your site. You continue to leave many videos that glorify rape on your website.

To end rape culture, we need you to send a message that videos depicting sexual harassment of women and nonconsensual sexual acts is not okay. We urge you to take reports of these videos seriously and to be stricter about removing these videos.

Thank you for your consideration.
Sign Petition
SHAREShare this petition with friends!TWEETEMAILEMBED
Sign Petition
See more petitions:
You have JavaScript disabled. Without it, our site might not function properly.