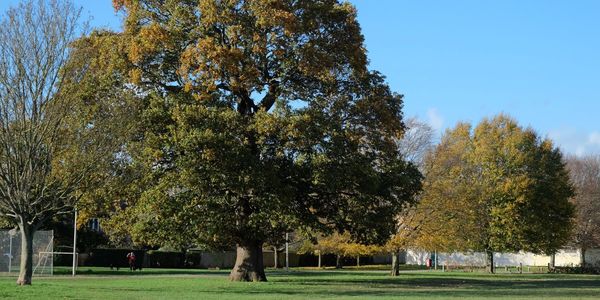 Save the Cowick Barton Oak

Exeter City Council wants to 'monolith' one of the oak trees in Cowick Barton Fields (the one by the path opposite the Tennis Courts). This means that all the branches and the crown of the tree are to be removed, leaving a tall stump. They believe its condition poses a risk to passers by and users of the playing fields. This tree is over 200 years old and a valuable home for wildlife, as well as being much loved by the community in St Thomas and beyond. We are calling on the Council to keep this tree and take alternative measures, such as fencing off the area around it and cutting back where it overhangs the path, for example. Let's show that we value our historic and important trees!

We have received a considered response from the City Council. The tree was damaged 6 years ago and has been monitored ever since. They ruled out felling, fencing off (apparently they'd have to fence off the whole area, including the tennis courts) and crown reduction.

My questions in response are:

If this was an issue 6 years ago, should there not have been some reduction/management of the tree then?

Can some of the damaged bits be removed to allow the tree to naturally regenerate?
Some residents have suggested moving the path and then fencing the tree off - is this possible?
I will update with a response as soon as possible.
In spite of the Council's response, I still think the tree should be kept. I think the community has shown sufficient interest in the tree to suggest that it is worth considering moving the path and creating an area around the tree that is left for wildlife. As many have pointed out, we are expecting nature to follow our rules, but perhaps the answer to protecting both people and the tree is to create an untouched area around it?
Sign Petition
SHAREShare this petition with friends!TWEETEMAILEMBED
Sign Petition
You have JavaScript disabled. Without it, our site might not function properly.