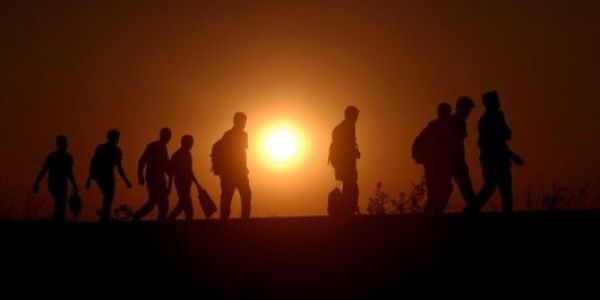 There are more than 4 million Syrian refugees in Turkey, Lebanon, Jordan and other surrounding countries as of last month, according to the Office of the United Nations (U.N.) High Commissioner for Refugees. An estimated 481,612, including more than 351,000 in Greece, have entered Europe by boat this year, according to the International Organization for Migration.

Among these, thousands of LGBTI refugees are hiding and fighting to survive. Their time is running out. They need to get to safety now.

In 2014, only 100 LGBTI refugees were accepted for relocation by the United States government according to U.S. Ambassador to the U.N. Samantha Power. That amount equals one-tenth of one percent of the U.S.’s total annual refugee quota of 70,000 refugees.

Subhi Nahas, a gay Syrian refugee, was one of those lucky 100. Last month, he stood before the U.N. Security Council at the first-ever meeting on LGBTI rights and told his story of being abused, fearing for his life, and escaping Syria with nothing but the shirt on his back. He is not alone. There are many others like him and they are at a crisis point.

LGBTI people are the target of ISIS and other extremists in Syria. ISIS has carried out 30 brutal public executions of suspected LGBTI people videotaped and photographed and distributed via the Internet. No one knows how many have died silently. Thousands more are living in daily terror of being found out and murdered, not only by ISIS, but community members, government authorities, and other militia groups.

“For my compatriots who do not conform to gender and sexual norms, the 11th hour has already passed,” Nahas told the U.N. Security Council. “They need your help now.”

Last month, President Barack Obama and Secretary of State John Kerry announced that the U.S. would welcome an additional 10,000 Syrian refugees in 2016.

Your help is needed. We want you to stand with Nahas to tell the United States government to save 500 slots specifically for LGBTI refugees – some of the most vulnerable -- fleeing for their lives to enter the U.S. in 2016.

To the Obama Administration

ISIS and other brutal militias are terrorizing towns and cities across Syria and Iraq, but one group has drawn particularly brutal interest: LGBTI people.

You’ve seen the videos of public executions of LGBTI people posted by ISIL militants on the Internet in the past year.

Last month, Subhi Nahas, a gay Syrian refugee, stood before the United Nations Security Council at the first-ever LGBT Arria and told his story of abuse, fearing for his life, and escaping Syria. He is not alone. There are many others like Subhi and the situation is beyond the crisis point.

Last year, Nahas was only one of 100 LGBTI refugees resettled by the United States, according to U.S. Ambassador to the U.N. Samantha Power. That is out of a total of nearly 70,000 refugees admitted.

“For my compatriots who do not conform to gender and sexual norms, the 11th hour has already passed,” he told the U.N. Security Council. “They need your help now.”

Only three months ago, Nahas, like his fellow LGBTI refugees awaiting placement in a safe country, was in perilous danger. Extremists are abusing LGBTI people in Turkey, Lebanon and other neighboring countries where his friends have fled. In Turkey, where Nahas lived for three years before coming to the U.S., a childhood acquaintance who joined ISIS threatened to kill him to gain entry to paradise. LGBTI refugees also find themselves under attack by some of their own people – other refugees who bring hateful homophobia to their host countries.

The attack on Istanbul Pride in June was widely reported. Nahas received photos of his friends’ injuries and they told him about the violence of authorities and the people watching the parade. In July, a gay activist was raped at home, reported the LGBTI News Turkey.

While Nahas is now safe in the U.S., he fears for his friends’ and other LGBTI lives. Nahas is working to help save their lives with the Organization for Refuge, Asylum, and Migration (ORAM). Last month, President Obama announced that the United States of America would reserve 10,000 spaces specifically for Syrian refugees. We, along with Nahas, are asking for at least 500 LGBTI lives to be saved.

The Obama Administration has waved the Rainbow flag and stood up for LGBTI people around the world. We stand with Nahas and ask the U.S. government not to turn its back on LGBTI refugees during their most desperate time of need.