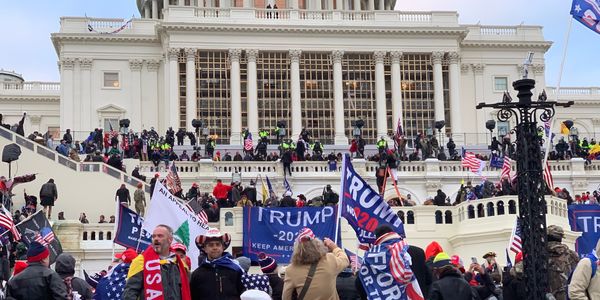 The fate of U.S. democracy depends on a safe and secure Inauguration Day!

The violent Capitol siege on January 6, an attempted but ultimately failed coup by Trump supporters, left dozens injured and 5 dead.

We have seen photos of masked, armed rioters with zip tie handcuffs inside the House Chamber -- we know they were willing and ready to take our members of our Congress hostage. We have heard that there were many pipe bombs and molotov cocktails found outside of the Capitol -- we know that they were prepared to perpetrate mass death. We have now seen the countless posts online by alt-right groups calling for all of this violent insurrection -- we could have predicted this would happen (many watchdog organizations, in fact, did.)

Federal, state, and local authorities must act on the information WE KNOW: that a dangerous amount of people are willing to resort to violence in order to uphold Donald Trump's treasonous, untrue claims that he won this election. Sign the petition to demand that Joe Biden's inauguration be safeguarded with an abundance of security personnel and protocols!

There are indicators that authorities are already taking this much more seriously than they did January 6. 10,000 members of the National Guard have been called to the D.C. area, compared to the meager 340 members that were called in for essentially traffic control on the day of the Capitol siege. A reported 5,000 additional Guardsmen will be standing by -- but if they are available and ready, why hold them back? We know from what happened on January 6 that calling on back up only when you need it could mean it's too late. Plus, credible threats involving Inauguration Day have already been sniffed out, one of which involves "4,000 armed 'patriots'" surrounding the Capitol Building. Send in those 5,000 extra Guardsmen, at the very least to offset this possible number of terrorists.

The National Park Service, which is in charge of the National Mall and its surrounding monuments, has also said it might block off roadways, parking, and bathrooms surrounding the Capitol. Again -- is an abundance of security and caution not warranted? These plans should be executed, not hemmed and hawed over just to be implemented when it is too late.

We also must continue to demand that every person involved in the insurrection on January 6 be arrested, charged, and indicted -- and this includes those who participated in plans and calls for violence online. If they are not found, arrested and charged, many of them will try again surrounding inauguration events. While the alt-right organizing app Parler has been (thankfully) shut down, almost all of its posts were recovered by archivists. This information must be used to track down anyone who had a hand in this attack on our democracy, and the planning of future attacks.

It is heartening that authorities seem to be using the deadly events of January 6 as a lesson learned. But those events should have never been allowed to happen.

Sign the petition demanding that federal, state, and local authorities do everything in their power to completely secure Joe Biden's inauguration against threats of violence and insurrection!

Care2
The fate of U.S. democracy depends on a safe and secure Inauguration Day!
SHARETWEET