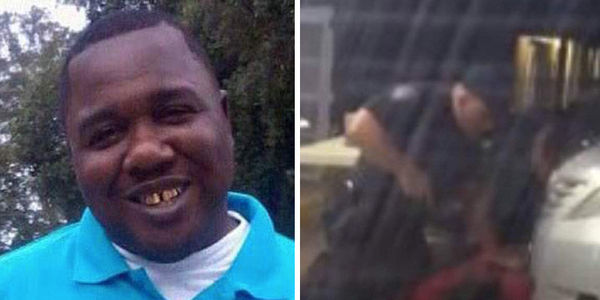 Two Baton Rouge police officers held down and fatally shot a Black man named Alton Sterling Tuesday morning. A cell phone video (graphic) taken from a nearby car shows the horrifying scene unfold. The DOJ has begun an investigation, but given the heinous nature of the incident, charges should already have been filed. Add your name if you believe the DOJ should charge and arrest the two officers who murdered Alton Sterling in cold blood immediately.

Alton was a father of five who was selling CDs and DVDs in front of a convenience store at the time of his death. The owner of the convenience store said Alton was not holding a gun when the two police officers tackled him to the ground, held him down and shot him at point-blank range. The officers (Blane Salamoni and Howie Lake II) are now on administrative leave, during which they will still be paid a full salary.

Alton Sterling died of multiple gunshot wounds to the chest and back, according to East Baton Rouge Coroner Dr. William Clark. There was no reason for the officers to shoot Sterling multiple times. The video of his murder clearly shows that Alton was pinned down, incapable of threatening the police officers when they shot him.

Protests have been going on since his death, with protesters chanting "Black Lives Matter" and "hands up, don't shoot". TIME magazine says "According to numbers compiled by the Washington Post, 505 people have been shot and killed by the police in 2016, and 122 of them were black. The Guardian has tallied 558 people fatally shot by the police, including 135 black individuals."

Sterling's family is grieving his unnecessary death. Quinyetta McMillon, the mother of one of Sterling's children said tearfully, "The individuals involved in his murder took away a man with children who depended upon their daddy on a daily basis....you will see with your own eyes how he was handled unjustly and killed without regard for the lives that he helped raise," While McMillion spoke to the reporters, Sterling's son sobbed beside her.

We demand the DOJ takes immediate action in charging and arresting the two officers who misused their power and took Alton Sterling's life without cause.
Sign Petition
SHAREShare With FriendsTWEETEMAILEMBED
Sign Petition
See more petitions:
You have JavaScript disabled. Without it, our site might not function properly.