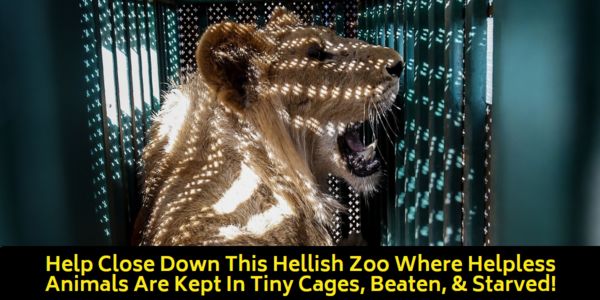 Shut Down Zoo Where Animals Suffer In Horrifying Conditions.

This hellish zoo was shut down months ago, and the owners made a pledge that they would never open again, but now they have gone back on their word. Add your name if you want to put this terrible place out of business once and for all!

"The Rafah Zoo in the southern Gaza Strip was known for its emaciated animals, with the owners saying they struggled to find enough money to feed them," according to the Times of Israel.

It was closed in April of 2019, when an animal rights organization called Four Paws rescued all of the animals held in captivity at the time.

The owners of the zoo pledged that it would stay closed forever, but now they have gone back on their word.

The article went on to say that they have "reopened with two lions and three new cubs, penned in cages only a few square meters in size.

"Critics say the owners want to bully Four Paws or other animal welfare organizations into giving them thousands of dollars to free the animals into their care.

"Four Paws paid the zoo’s owners more than $50,000 in the year before its closure for medical treatments, food and caretakers."

Unfortunately, it is not only lions that suffer:

"An ostrich in a three-meter-square pen pecked endlessly at the cage’s bars, while two monkeys sat chewing on litter," according to the same source.

When Agence France-Presse (AFP) visited the zoo, they witnessed a mother lioness being beaten with canes so that her cubs could be taken away to play with customers. They reported that facility staff taunted her after her cubs had been stripped for her care.

“The zoo won’t survive during the winter, because they are lacking in daily goods which cost a lot," said Mohammed Aweda, a prominent animal enthusiast in Gaza.

You know that the animals imprisoned in this zoo will meet the same fate as the animals that were rescued back in April: starvation.

Don't you want to shut down this miserable place where animals suffer, once and for all?

Then add your name to demand that Sa'ad Zoarub, government head of the municipality where the Rafah Zoo is located, initiate action to ensure that this horrible place is closed forever!
Sign Petition
SHAREShare this petition with friends!TWEETEMAILEMBED
Sign Petition
See more petitions:
You have JavaScript disabled. Without it, our site might not function properly.