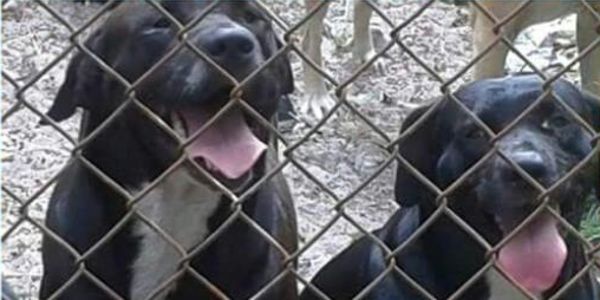 On May 28th, 2015, 5 dogs were confiscated from their secured gated property by Hillsborough County Animal Services. They were responding to a complaint of a 19 yr old girl that trespassed onto the gated property with signs stating NO TRESPASSING and BEWARE OF DOG. Buddy, the son of the property owner, saw her enter the property and he was telling her to stay out and he then fell. This was very alarming to his family dogs and they immediately began to  protect Buddy. The trespasser, who caused this commotion, was bit by a dog and then she ran to the gate and jumped over it to flee the scene.

Animal Services showed up at the property a couple days later. The property owner's son went out to see what was happening and saw that one of his dogs was darted. Animal Services said they were taking all the dogs they think might have bitten the girl. They bullied Buddy, the son of the dogs owner, into signing a form without telling him what he was signing.  Buddy got his sister on the phone and they told Sylvia that he HAD to sign the form.  They never explained to Sylvia or Buddy that this form was to surrender all of the dogs to Animal Control.  Buddy later found out that he had the right to refuse to sign it.

Animal Services never spoke with the only witness to verify what happened and proceeded to seize the dogs without all the facts for their investigation. When the witness found out about the fate of the dogs, she, of her own will, contacted Animal Services to confirm her account of what happened because Animal Services failed to contact her directly. Even with this new information, the shelter said her statement did not matter, the dogs were already seized, property of Animal Services and they were going to keep them quarantined with the possibly of euthanasia on June 7th, 2015.

Lynn spoke with Loretta Magee at the Shelter and she said that they will put a hold on the dogs until Wednesday, June 10th.  We are grateful for this consideration.


Hillsborough County has failed this family and failed these dogs.  The clock is ticking and each hour, each day that passes with out a response from Animal Services is running out the clock to save the lives of these dogs.

As of 6/4/15, the Operation Manager stands by the Animal Services officers that claim they told Buddy and Sylvia that he was signing papers to surrender the dogs.  The investigation is still in process and he said once he had all the facts, they will deterime if these are dangerous dogs.  They will be assessed as a PACK which means that if they are deemed dangerous, all will be euthanized.  He said that because the victim did not point out the specific dog, all the dogs will suffer the same fate.

IF Buddy did not sign that form under pressure, the dogs would still be owned by the family and they would be able to have a hearing for the dogs.  Now that the dogs are PROPERTY of Animal Services, there will not be a hearing and the family does not have a say or a right to get their dogs back if they are declared as dangerous.  Owners typically can keep their dogs if they are deemed as dangerous as long as they comply with the county rules.  This family had that right taken away from them.

We are asking for your support to to help get the word out to Hillsborough County that they need to have ALL the facts before they kill these dogs. There are no previous reports of these dogs being aggressive and they should not be killed do to the ignorance of a trespassing girl that caused this situation. We are hopeful that with all the FACTS and your support that the lives of these dogs will be spared.

We also want Hillsborough County residents to be aware that your dog could face the same situation if someone trespasses on your property and if your dog goes to defend you, you and your dog are not protected by your county employees.   We also want you to be aware that you DO NOT have to sign any forms that Animal Services gives you. They bullied this poor man into signing a form to surrender the dogs with out him having the chance to read it! He is devastated that they never informed him of his rights or that he was even surrendering his father's dogs to the shelter.  If he did not sign the form, he would be able to file an appeal to save the lives of these dogs. He can not do that now because the dogs are "property" of the Hillsborough County Animal Services.

Buddy's father, the dogs owner, is in the hospital in critical condition.  His family, already devastated, now has the addtional stress and pressure of saving their father's dogs.  All their focus should really be with thier ailing father.

The family and dogs attorney is still working with the shelter to get them out of the shelter.  We were sent pictures of the dogs still alive in the shelter. As of right now, the fees to get them back to the family will be very costly.  Here is the link to donate if you can. Save the Tampa 5!

We would also like to mention that the people helping the family with this petition are a group of conerned animal advocates from California to Detroit to Florida.  Within the past couple of months alone, we have helped to rescue 8 dogs in 3 different cases from death row.  Please do not attack the family, rescue group or the trespasser.  We are addressing Hillsborough County Animal Services and trying to save the life of these dogs.

Please help the dogs and their family by contacting the shelter and asking them to acknowledge and properly address this situation including the many failures in procedures for this case.   Ask them to spare the lives of these dogs and to return them back to their loving family.

Pursuant to Florida Statutes: Title XLV Chapter 767.12(1)(a)(b)(c)(d) We hereby respectfully request you stay any pending or perceived order of execution and DO NOT EUTHANIZE the 5 dogs that have been confiscated as a result of the above case number.

The dogs have been ordered signed over to animal control. The dogs were signed over by a non-authorized party and all documentation of said incident has not been completed. All dogs have not been identified properly and true owner lies in a hospital bed. Witness statements have been obtained and an official report by the property owner is forthcoming.

The above mentioned statute allows for a completed investigation and interviews of all parties. Further, it requires that no dog under investigation for a dangerous dog classification receive transfer of ownership.

We believe these dogs fall under all aspects of this statute and are entitled to their due process.

A public petition is being prepared to assist in this cause. We have had no update from your department following our advocate’s personal on site visit and multiple emails, phone calls and requests for consideration.

Please respond immediately as we feel this matter is of the most urgent. We have found that due to the high volume of animals at the facility and field duties of staff, the dogs are in severe jeopardy as we have not been able to obtain a status update or perform a well check.

Please contact one of our team members: Lynn Dalton at 906-361-7117 and/or Karen Gerasimchick at 954-980-8675 immediately. We do not purport to discuss the specifics of this investigation; merely the stay of execution for these dogs.