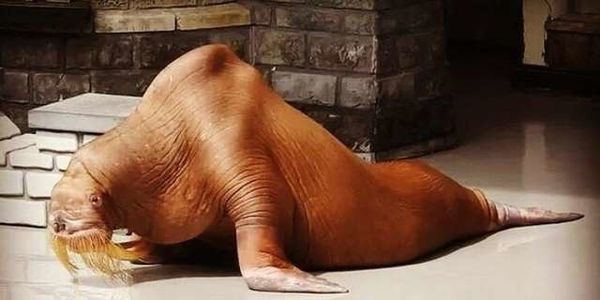 Ontario's Marineland is home to the Dragon Mountain roller coaster, the Sky Screamer triple tower, and the "Ocean Odyssey" rides. It is also home to more than 4,000 live land and sea animals and a whole lot of controversy.

Over the last few years, the "amusement" park has come under public scrutiny for the several high profile marine deaths stretching throughout their nearly 60-year history.

According to One Green Planet, over their six decades of operation, the park has seen the deaths of, at least, 17 orca whales, 25 beluga whales, and an estimated 22 dolphins. So bad is their care that at one point even SeaWorld — no hero in animal rights — sued Marineland to get on of their orcas back whose health they claim had deteriorated after loaning it to the Canadian park.

Now they can add another victim to their list of animals that died in their care: Zeus the walrus. Zeus was once a fine specimen of a young, vibrant male walrus. But his years in captivity at Marineland had taken a toll on him.

Life in captivity for Zeus was no walk in the amusement park. He suffered from chronic regurgitation which arose from stress from captivity. His disorder meant that he couldn't properly digest food and it left him "so undernourished that his hip bones and spine stuck out."

In a statement last week, Marineland said that the necropsy performed on Zeus revealed he died of natural causes. But one of Zeus's former trainers, Phil Demers, isn't buying it. He told the Dodo that Zeus "had been ill for as long as [he'd] known him" — around 15 years.

Whatever the reason, Zeus like Marineland's other animals should never have been kept in captivity in the first place. These animals are literally dying to be free and we must help.

Ask Marineland how many of their animals must die before they realize that what they are doing is animal cruelty.

Sign the petition and tell Marineland to end their live animal shows and give their animals to a proper sanctuary.

Photo credit: Facebook/Phil Demers
Sign Petition
SHAREShare With FriendsTWEETEMAILEMBED
Sign Petition
See more petitions:
You have JavaScript disabled. Without it, our site might not function properly.