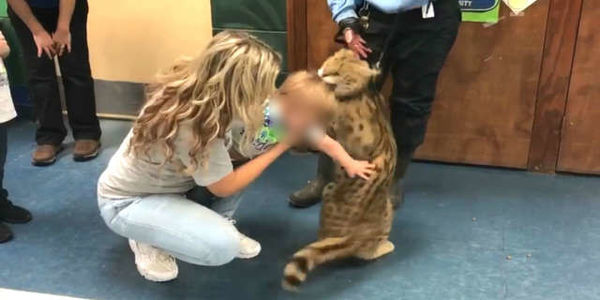 Earlier this month, a mother and son went to the zoo to see some wild animals, but they never could have expected exactly how wild their encounter would be.

It all happened when a group of children went to celebrate a birthday party at a zoo in Indiana. The Potawatomi Zoo has an "ambassador animal" program which they believe gives their guests a unique opportunity to get up close and personal to some of their collection. For a hefty fee, you and your party can "invite" a wild animal to your event at the zoo.

That's how Copper, a wild African serval cat, ended up in the unnatural situation of being used as a prop for a "meet-and-greet" at a child's birthday party. Surrounded by screaming children, under bright indoor lights is never a situation a serval would find itself in the wild. When one of the mothers knelt down with her child to get a close up with the cat, Copper decided he had had enough and struck out, swiping the boy with his paw and biting him on the head.

In the video, one could hear gasps and screams as the mother pulls her child away from the cat.

Zoos should know better than almost anyone that wild animals shouldn't be forced to interact with people, especially children. Doing so puts both the animal and the child at risk. The child, in this case, was lucky, but it could have been much worse. For example, there is no vaccine for rabies for wild cats. The only way to know if a cat like Copper had rabies would be to put him down and test him. If the child's mother was worried about her son catching rabies, the authorities would have to kill Copper. Risking his life, just so the zoo could make a little extra cash.

A spokesperson for the zoo says that Copper has now been taken out of the program for the time being. But he never should have been forced to participate in it in the first place. No wild animal is completely safe, especially around children.

The Potawatomi Zoo must stop endangering their pets and their public with this misguided program. Sign the petition and demand that they stop using wild animals in their ambassador animals program.
Sign Petition
SHAREShare With FriendsTWEETEMAILEMBED
Sign Petition
See more petitions:
You have JavaScript disabled. Without it, our site might not function properly.