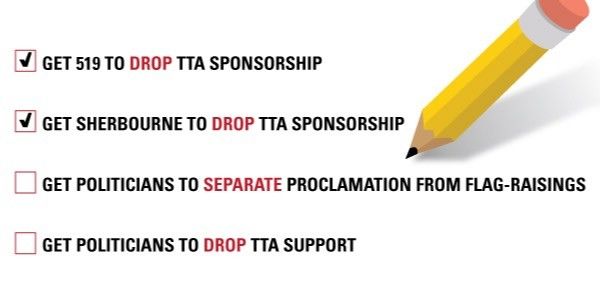 Letter for Politicians Involved in Trans Flag-raisings on TDoR

As we understand it, Queen's Park and City Hall are responsible for organizing the proclamations and moments-of-silence (MOS); however, it is the TTA that organizes the flag-raisings.

Given the colonial history and symbolism of flag-raisings as well as the exclusionary and elitist practices through which the TTA has organised local TDoR flag-raisings, many of us in the trans community feel that this is a racist and otherwise problematic event. Several trans people, including trans women of colour (TWOC) whose issues should be prioritized given the nature of this event, have written about the local flag-raising's racist and colonial nature. These issues include (but are not limited to):

1) The colonial history and symbolism of state-sanctioned flag-raisings is an inappropriate, insensitive, and counterproductive method of commemorating the deaths of trans people -- primarily TWOC -- since the anti-trans violence that caused these deaths is the result of a system of gender that was violently imposed through colonisation and which continues to be supported by colonial structures

2) The consistent lack of community-wide consensus-based decision making processes surrounding these events and the related failure of the TTA to prioritize TWOC and racialized trans folks, as would be necessary for anti-racist organizing

3) Tokenizing a few racialized trans folks, by the TTA in its organisation and implementation of their flag-raisings, to play with optics and the divide-and-conquer strategy, which is a colonial practice

4) Use of the event by the TTA to build political capital, which allows it to illegitimately claim umbrella representation over the trans community and to be treated as such by external bodies (e.g., the Human Rights Commission) thereby justifying decisions not to seek direct community input for policies, etc., that impact trans community members

Given these unresolved issues and others, it is important for politicans to remain neutral while the trans community processes this inter-community conflict. It is inappropriate for politicians to attend the flag-raisings, as it lends them validity, social and political capital both to the events themselves and to their organisers, the TTA.

We propose that the events by politicians and community members be separated. The proclamation and MOS at both Queen's Park and City Hall should be held separately from the flag-rasings. As sites of internal community conflict, the flag-rasings should not be attended by any politicians. We do not intend to protest the proclamations or MOS beyond what is part of the flag-raisings. There are other ways for politicians to show support for trans communities at TDoR, as there are many other TDoR events planned in the community. Examples include events at the 519 and on university campuses. We encourage those events as an alternative.

For more informaton on in-depth analysis, please feel free to browse through the qtcase.com website.