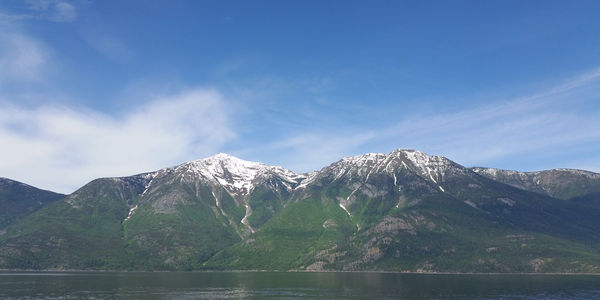 An application for adventure tourism operations in the Purcell Mountains has been put forth by a company called Retallack (1155768 BC Ltd.) who is based out of Nelson, BC. This application is in collaboration with some members of the Kootenay First Nation's, Lower Kootenay Band.

The proposal would expand Retallack's current operations and exploit over 70,000 hectares (over 700 square km / 173,000 acres) of pristine wilderness in the Purcell Mountains between Kimberly, British Columbia and the east side of Kootenay Lake. The plan includes helicoptering tourists to remote areas for skiing, snowmobiling, dog-sledding, horse-riding, mountain biking, hiking, and other activities. This project also includes building a lodge on Kootenay Lake at Burden's Cut.

Not only will the helicopter activity (numerous flights per day over most of the year) and increased traffic decrease the quality of life and peaceful enjoyment of residents and existing recreational users along the east side of Kootenay Lake, the expanse of the project will - most importantly - have significant impact on the ecosystem and wildlife in the relatively untouched Purcell mountain range. The proposal also appears to neglect outlining waste removal strategies from the backcountry and has potential to affect the last remaining endangered caribou that could range in the area!

There is also little regard for the residents who live in the area that will be impacted by helicopter traffic, as well as the impact helicopters and snow-machines will have on wildlife. Most of the area is under the Cranbrook West Recreation Management Strategy, which bans helicopter-based recreation from all but a small area of the proposed tenure; however, this may not guarantee refusal of the proposal so the more people that oppose the application the less chance it has to be allowed. There is already going to be an expansive project (Jumbo Resort) going ahead further east in the Purcell range so everything must be done to protect this area from commercialization to maintain at least some wild landscapes. This is public land (Crown land) where individuals can hike into or access via existing trail or old logging roads - enjoy the area on your own using low impact methods, not high impact, noisy, and commercial ventures!

It is foreseeable that there would be little chance for economic returns to the community as patrons of this venture would likely not spend much time venturing through the tiny and spreadout villages in the area (especially those being transported from airports and not having their own transportation). There is also little chance of actual job creation in the area due to the specialized nature of the operation requiring various certifications (helicopter pilots, ski personnel, backcountry guides, etc) - many of which will probably need to be brought in from elsewhere. Even if there was actually opportunities to increase profits or jobs, many area residents do not want the increased tourism and helicopter traffic regardless!

Detailed information and concerns can be read below. If you oppose this proposal, please sign this petition by July 14 and send comments directly to the following. It is especially important for local residents - residents on the east side of Kootenay Lake - to also send comments directly to those listed below as local voices are going to create the greatest amount of pressure (but all voices are welcome and encouraged no matter where you reside).

Please also leave your comments at this link on The Government of British Columbia's website. After clicking, there is a link near bottom to leave comments by July 15.

Any mode of voicing your concerns will help, but if you can take the extra time, please sign here, send comments to the above recipients, and leave comments on the government website for maximum impact!

NOTE - This petition is in no way condemning any company or group involved in this application, it is merely against large-scale environmental, ecological, or quality of life disturbances to the area of east Kootenay Lake and the Purcell Mountains, regardless of the applicant or others involved.

One location for helipads and location of the lodge is on land being negotiated for return to the Kootenay First Nations from the BC Government (currently Crown land), as part of Ktunaxa traditional territory. This is located near Burden's Cut in the area of Gray Creek, BC and includes rights to the beach access at Burden's Cut on Kootenay Lake. Additional sites include a number of helipads in the area of Crawford Bay and Crawford Creek, along with various other locations (a full list can be found in their management plan). This project includes multiple flights during summer and winter periods. Use of a number of these sites will intrude on the peaceful enjoyment by residents and existing recreational users who visit the area for peace and quiet (no matter what methods are taken to reduce the noise from helicopter traffic). The general consensus of residents of east Kootenay Lake seems to be primarily with maintaining the current serene and natural environment.

Ecologically and environmentally, the impact to the area will be vast and irreversible, to both wildlife and residents. The helicopters alone will bring great noise pollution and will result in negative impacts on wildlife, compounded by increased snowmobile use in the area. There will be increased pollution through refuse, toxins, etc. that inevitably result where people intrude, especially when adding in equipment, machinery, or mechanized transportation. There is risk to the quality of mountain sourced water with the proposed backcountry activity, effecting both wildlife and human use of this resource. The chance of negative animal/human interactions will also increase, where animals frequently pay the ultimate price of such encounters. This activity will also displace animals and may push them towards existing human developments, which is especially concerning for large predators that are unwelcome in such settings, often resulting in their euthanization. The plan also entails future hut-to-hut accommodations accessible to clientele of this venture. This will only increase impact on the remote environment and wildlife beyond the extensive network of trails proposed, added human presence, snowmobile and helicopter interference, etc. In regards to the lodge, adding more accommodations on the lake increases risk of reducing water quality, increasing eutrophication, and harming aquatic life.

The southern reaches of this area have a small overlap with the drastically declining Southern Mountain Caribou's (Rangifer tarandus) range. Retallack's management plan acknowledges there is potential for their occurrence within the proposal area. Risking any actual or potential caribou habitat should in no way be considered! The plan outlines a number of other species that reside in the area (some of which are threatened – ranging from "special concern" to "endangered" by COSEWIC), along with efforts to avoid disturbance, but in reality, there is no way to not disturb the greater ecosystem or its inhabitants with this type of human intrusion. Many species are extremely sensitive to presence of humans and human development – and even more so when mechanized equipment is involved - resulting in negative impact with even minimal change to critical habitat. Trail systems alone can cause changes to predator-prey dynamics by allowing predators easier access to prey (which is of especially great concern when prey is a threatened species, such as caribou).

Wildfire risk will also increase, along with risk of fuel spills relating to aircraft (either during transportation of fuels, refueling, at the various fuel storage sites, or in-flight). British Columbia cannot afford - on many levels - increased fire risk when wildfires already routinely plague the region in summer months. This is especially concerning for the remote residences and properties on the east side of Kootenay Lake. Nor should British Columbia allow more opportunity for fuel and other toxic chemical spills, especially in remote and hard to remediate areas. There are also no provisions listed for waste removal from the backcountry!

In addition to valuable wildlife information on the area, Wildsight also outlines existing management strategies of helicopters in this region, which has been largely banned due to the area being too environmentally sensitive for helicopter access. This shows that there are already restrictions on helicopter use for many areas of the proposal and pressure needs to be put on decision makers to uphold existing bans. In regards to the portion on the Kootenay Lake side, it is connected to the area within the existing management strategy discussed by Wildsight and just as environmentally sensitive.

Sacrifices, even at the expense of economic gains for any group or human entertainment, must be made in order to protect remaining wildlife and wild-lands, as well as areas that those wanting to live peaceful existence can do so without threat. Thank you in advance for your support!