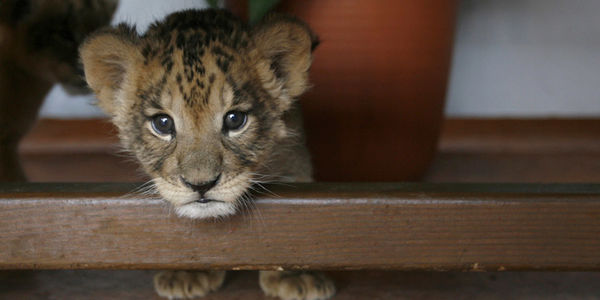 Close Down Cub Petting Facility in Portland, OR Suburb in USA

Calling on everyone that cares about the treatment of exotic animals and wants to see change. Please sign this petition to close down the exotic cub petting and animal selling group known as 'A Walk on the Wild Side' in Portland, Oregon suburb.

Many people have read the recent article written by the prestigious Willamette Weekly newspaper A Defiant Couple is Caging Big Cats in the Portland Suburbs and have formed their own opinions as to what these people are really all about. We're asking anyone that feels strongly that these people do not represent the best welfare of these animals to please sign this petition to close them down!

Still unsure? Here is a couple of articles about the cub petting industries that are sure to answer your questions:

Here's Why You Should Never Pay to Pet A Tiger

Myth-busters: Debunking the many myths of Lion Cub Petting

The Truth About Cub Petting

Cub Petting is NOT cute. It's Animal Abuse!

We support and donate to all kinds of rescue operations and real sanctuaries across the world, but these people are the exact opposite and are exploiting exotic animals in the worse way possible. Exotic Animal Lovers know that cub petting and taking a selfie with an exotic animal is extreme abuse and a life of hell for the animal(s). There is simply NO good reason to put these animals through this. To make any animal ready for public interaction means it must be taken from its mother almost immediately after birth and hand raised, which they fully admit to in the article. This causes extreme stress for not only the cub but also the adult mother that just gave birth to the cub and now has no idea where her cub is! It is also a common technique used to force the female into heat soon after the birth so she can be presented for breeding again. Hauling exotic animals, especially baby cubs, up and down the West Coast to all types of fairs, roadside zoos and private parties, subjecting them to continuous loud noises, extreme heat and/or cold with tons of strangers ogling and handling them is torture for these fur babies! Many cubs are drugged so that they are more malleable and easy for the public to handle; for instance, Benedryl is often used because it doesn't show up should a surprise drug test happen. The sores seen on their noses and faces are from rubbing their faces across their cage bars repeatedly due to stress and severe anxiety - NOT because they want to get out and hang out with humans. These cubs need lots of rest and sleep to grow properly and is another reason they look so dazed when you see them. They're exhausted! These magnificent creatures deserve so much better!

A Walk on the Wild Side recently relocated to Hillsboro, Oregon (in Washington County) from Canby, Oregon. They were notified, by Washington County before the move, that the land was NOT zoned for exotic animals, but they moved in regardless. Now they're concocting a story to try and fit into the zoning as a farm by selling tiger poop - REALLY?! This is an example of their mentality and attitude towards authority and our laws. They claim public interaction with these animals is for public education; but, when we posed the question to them that, in this technological age, why brochures, pamphlets, video, public speaking, etc. wouldn't do the same thing and not subject these poor animals to traveling, heat, cold, loud fairground noises and hundreds of strangers holding them... we were not answered and blocked from their Facebook page. We've read posts on their Facebook page where they admit to breeding these animals and will even sell them to you. As EVERY concerned animal lover knows this is the complete opposite of what a loving, rescue facility is all about. They're clearly running under the guise of a farm and rescue facility when it's quite clear to anyone that they're really taking horrible advantage of these animals. They have a non-profit status and public records show they make $250,000 to $350,000 A YEAR! They further stated in the article above that no one receives a salary, including the owner(s). Yet the photos show you animals in excruciatingly small and run-down cages; they also continue to RENT each location they move to instead of purchasing a legally zoned area for exotic animals. It begs the question, where is all the money going?

Please sign this petition to close this cub petting and selling facitily down! It will be delivered to Melissa DeLyser with Washington County Authorities, Tom Harry with Washington County Code Enforcement Inspector, The USDA, Steve Pedery the conservation director for the environmental nonprofit Oregon Wild, Anna Frostic, an attorney for the Humane Society of the United States and The Oregon Zoo.

Care2
Close Down Cub Petting Facility in Portland, OR Suburb in USA
SHARETWEET