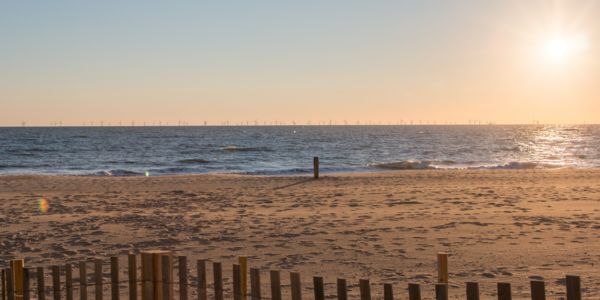 Eighty-six wind turbines are slated to be built off the shores of Ocean City, MD.

Save Ocean City, MD and Fenwick Island, DE: Do Not construct wind turbines off our shores!

Most of us are in favor of green energy. However, when initiating a green project some common sense needs to be in place.

The currently proposed turbines are 8 megawatt units, they are 370' tall from the water line to the hub with a 550' blade diameter. The overall height from the waterline to the tip of the blade is therefore approximately 650'. The height of the Washington Monument and more than twice the height of the tallest building in Ocean City. When a change of this magnitude is encountered, it is not unreasonable to expect the distance from shore would increase to ensure that the turbines will not be seen from the shore. These projects are being subsidized by Maryland electric consumers through a special fee added to their electric bill.

The current proposed field off the Maryland coast consists of 86 turbines constructed in 3 phases and extends the entire length of Ocean City, from the inlet to the Delaware line. Phase 1 is located 17 miles offshore, phase 2 is 15 miles offshore and phase 3 is 13 miles offshore. There are no limits to the number of turbines that can be constructed in a given lease area.

The current field off Delaware supported by the Maryland subsidy consists of 15 turbines. The location starts just north of the Town of Fenwick and runs to the indian river bridge. It is located approximately 19 miles from Ocean City. There are plans to construct 50-60 additional turbines in the northern portion of the Delaware lease area but these would not be subsidized by Maryland utility customers.

There are many businesses that depend on the ocean view and there are many people who value the unadulterated, untainted view of the horizon, of the sunrises that the ocean shoreline bestows. The ocean has been there long before we walked this earth. It is one of the few untouched views that are left in this world. It would be a grave mistake to take that pure, unsullied view away for the sake of 20 years of "clean" energy.

We need to stop the turbines! They are destructive to the environment, they devastate saline. They will bring the fishing industry to a stand still. They mame and kill whales, dolphins, birds, bats, and insects. They cause infrasound which is unhealthy to any life around a wind turbine -including human life. They do not decrease CO2 emissions. They are not green - they use large amounts of fossil fuel when they are constructed and when they are in use. Their blades are not recyclable. Their electric cables are having trouble getting from the turbines to the national grid. They are an unreliable source of energy at best. They are an out dated energy form that we cannot and should not subsidize. Wind turbines cannot exist without being subsidized. The Maryland government is subsidizing the wind turbine project off our shores with energy consumer fees. Our electric bills will triple. We will have oil leaks in our ocean. There's just nothing good about wind energy. That's why Europe is stopping its production and the foreign companies are buying up leases to put turbines in our ocean. BOEM is letting them get away with it.
We the taxpayers are subsidizing the turbines that will cause the destruction of a view that is unparalleled and now it is time to stand up and demand that we, the people, are heard! We do not want the wind turbines to be built off our shores.