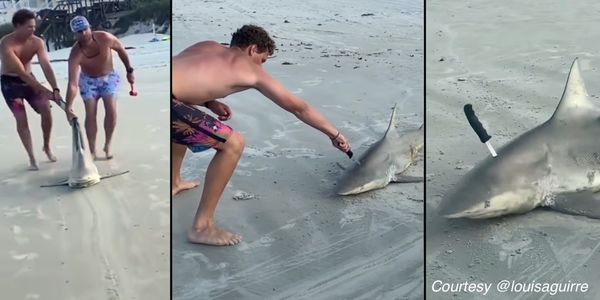 Two Men Stabbed a Shark in Its Head and Tortured It While Laughing. Officials Say It Was Legal.

A shocking case of animal brutality unfolded recently in Florida - but Florida officials have no plans to go after the cruel perpetrators. Two men visiting a beach spied a black-tip shark nearby, minding its own business and doing no harm to anyone. But they decided this was a ripe opportunity to abuse the animal. So they dragged it ashore, as it wriggled and whipped its tail, trying to get back to safety. Then they gleefully stabbed the shark right through its head. The helpless animal could not escape -- so it lay there, with no choice but to endure.

Even worse, the poor shark did not die immediately. So they inserted the kitchen knife multiple times, over and over, laughing while they watched the shark writhe in agony. It was clear they took pure delight in torturing this innocent creature to death and watching it suffer.

The men were so proud of their sadism, they took video, so we have evidence of the entire ordeal caught on film. The recording shows that other beachgoers were horrified by the violence, and at least one woman desperately begged the men to stop what they were doing. But they carried on anyway.

Sign the petition to demand justice! Florida must protect sharks, and charge these two men with animal cruelty!

Sharks are already under threat from many directions - overfishing, climate change, habitat destruction, and stigmas that encourage people to harm and maim innocent animals out of a misguided sense of "safety." On average, researchers estimate that humans kill around 100 million sharks each year.

Yet sharks are incredibly important to the entire ocean ecosystem. They preserve balance and regulation in food chains, which protects biodiversity and keeps fish populations healthy by weeding out sickness. In fact, they're so important, researchers refer to sharks as a "keystone species." As journalist Louis Aguirre notes, "A healthy ocean needs a healthy shark population. If the sharks die, the oceans die."

Sharks even help reduce carbon by holding relatively large levels of the element inside their bodies! That's deeply important for fighting climate change. Now, though, scientists consider black-tip sharks "near threatened," which essentially means verging on endangered status. We cannot allow individuals to be murdering sharks at random - and certainly not brutally butchering the animals.

Despite all this, the Florida Fish and Wildlife Conservation Commission has stated that "no laws were broken" and that the men's actions were entirely "legal." Why? Because Florida does not have sufficient laws to protect sharks from such cruelty. On the contrary, it allows humans to "harvest" black-tip sharks in whatever way they choose - any type of killing is permissible.

In other words: these men stabbed an innocent creature right through the head, and dragged it ashore to die. And they will walk away completely free, with no repercussions. This means many others like them are out there - and other perpetrators will likely feel emboldened by these men's actions. Florida must change its laws now!

Tell Florida lawmakers to do the right thing, and pass laws to ban shark killing in their state. We need these precious animals in order to keep our Earth healthy. And they need to be protected from cruelty!
Sign Petition
SHAREShare With FriendsTWEETEMAILEMBED
Sign Petition
See more petitions:
You have JavaScript disabled. Without it, our site might not function properly.

Care2
Two Men Stabbed a Shark in Its Head and Tortured It While Laughing. Officials Say It Was Legal.
SHARETWEET