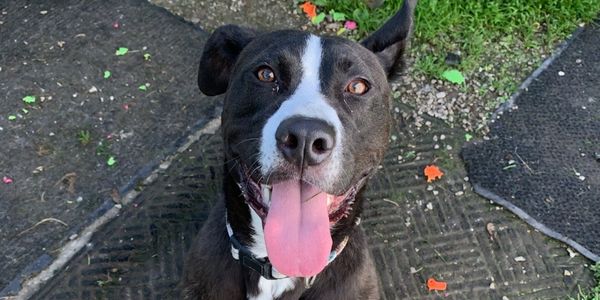 I was recently employed at the Humane Society of Monroe County. I had worked there from December of 2017 until May of 2018, then returned in May of 2019. During my time there, we had a dog named Dudley at the shelter. He was transferred to Monroe from Detroit Animal Care and Control. As of June 2019, he has been at the shelter in Monroe just shy of two years, not including his time in Detroit. Today he is approximately three and a half years old, neutered male pit mix. He has been adopted out at least 6 times, only to return shortly after for biting. He has never been given the chance to decompress in his new home, nor has he been trained. He does have some anxiety issues, but has never seen a veterinarian for an evaluation for this. He has been a staff favorite for some time, as he is quite friendly and affectionate once he is outside of his kennel. He has lived 75% of his life in a cage with no help adjusting to his new experiences or homes. When I was told of his possible pending euthanasia, I started reaching out to rescues that could off the help he so much needed and deserved. He was scheduled to be euthanized on Tuesday June 18th. I reached out to The Humane Society of Monroe County's executive director in hopes of delaying his execution. He was granted a two week extension, while a suitable rescue could be found. I reached out all across the United States for help, speaking to nearly 100 different rescues, each leading me further in my journey for placement. When I returned to work at this NO-KILL shelter a few days later, I was fired for trying to do the right thing, saving Dudley. While I was being let go, I still offered to take Dudley, get him training, and a Veterinary evaluation, if no rescue could be found. The very next day Pitbull Advocates of Armstrong County in Pennsylvania reached out saying they could offer placement for Dudley. I was so very happy. I offered to transport Dudley from his Monroe, Michigan shelter to Pennsylvania to his potential rescue. The rescue reached out that day to shelter manager at the humane society of Monroe county, to no avail. On Sunday I sent the potential rescue information to the shelter manager, Candace Buttrick. I heard no response. They potential rescue has heard nothing. Other potential adopters would call to inquire about Dudley, only to be given no information. His time is up on Tuesday July 9th, if the shelter manager cannot find placement for Dudley. He has had placement for a week now, but the Humane Society of Monroe County ha not responded. Please help me stop the Humane Society of Monroe County from euthanizing Dudley and ask them to accept the offer from Pitbull Advocates of Armstrong County in Pennsylvania. If they are truly a No-Kill shelter , as they claim to be, Grant him the chance to be a normal dog for once in his life. Please help me save Dudley! An extremely beautiful soul! Thank you, Kellie Osborne former Humane Society of Monroe County employee
Sign Petition
SHAREShare this petition with friends!TWEETEMAILEMBED
Sign Petition
See more petitions:
You have JavaScript disabled. Without it, our site might not function properly.