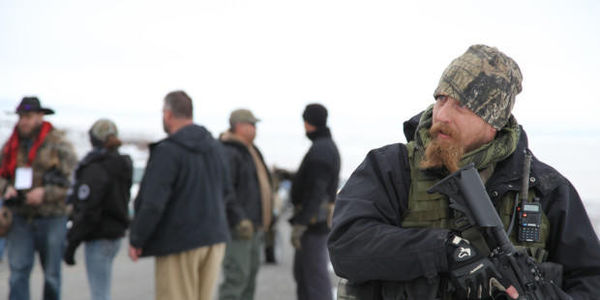 Tell Congress to Increase the Number of Federal Wildlife Officers to Keep Staff and Visitors Safe!

On October 27th, a federal jury found the seven armed occupiers who took over and occupied the Malheur National Wildlife Refuge in Oregon to be not guilty of conspiring to impede federal workers from doing their jobs during those 41 days in January and February this year.

This decision leaves us stunned, outraged and extremely concerned for the safety and welfare of staff and visitors on national wildlife refuges across the nation.

The message this verdict sends to others who would challenge the right of dedicated Refuge staff to do their work and provide for their families is chilling. While we hope this decision is not interpreted as license for others to disregard the public interest and occupy national wildlife refuges or other public lands across the country, we know this concern was on the minds of thousands of Refuge System employees and their families this morning as they went to work.

The employees of the U.S. Fish and Wildlife Service have dedicated their careers to public servicethat benefits each and every American. But who among us would willingly risk going to work knowing that armed occupiers can, without consequence, take over any and every desk, compromise careful research collected over years of field seasons, and urge others nationwide to join them?

The verdict came on the 158th birthday of President Theodore Roosevelt, who designated the first national wildlife refuge in 1903. President Roosevelt would never have stood by if something like this happened and nor can we.

The Refuge Association, a non-profit organization devoted to promoting the Refuge System as the world’s largest network of protected wildlife and habitat, calls upon Congress to immediately provide the Refuge System with the number of Federal Wildlife Officers needed to keep staff and visitors safe. Congress must ensure that all Americans can freely enjoy our public lands without the danger of encountering armed occupiers claiming the authority to restrict public access.

Please join us by signing this petition, which will be delivered to every member of Congress when they return after the election.

As an American who values national wildlife refuges – and expects to be able to safely visit refuges with my family – I stand with the National Wildlife Refuge Association in calling for Congress to provide an additional $134 million for the U.S. Fish and Wildlife Service in the final FY17 appropriations bill to provide an adequate number of  Federal Wildlife Officers on duty at every one of our 566 national wildlife refuges. This funding will allow the Fish and Wildlife Service to protect its staff and refuge visitors. If armed occupiers can legally take over a national wildlife refuge, then as an American, I deserve the right to have Federal Wildlife Officers protect my right to be there too.