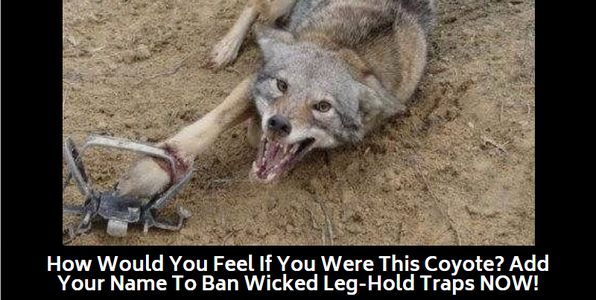 Leg-hold traps snatch creatures by the leg, and force them to endure a long, suffering death.

The best they can hope for is to chew through their own flesh and escape.

Add your name if you want to ban these vicious traps once and for all!

Imagine what it would be like to have your foot caught in a pair of steel jaws.

They're too strong to pull apart.

Your leg is broken, so you lay there in agony.

As time passes, you hope someone will help you.

It dawns on you that you're going to die here.

That's the reality for many animals whose legs are caught in one of these wicked traps.

"No tool in Wildlife Services' arsenal kills more nonselectively – or slowly – than the leg-hold trap.

"But whether animals are caught accidentally or not, they often struggle for days and die of exposure, injuries and other causes long before a trapper returns to the site," reported the Sacramento Bee.

"They suggest traps be checked once a week, but that's all it is, a suggestion.

"There are traps that are not checked for literally months at a time," said Gary Strader, a former Wildlife Services trapper in Nevada from 2006 to 2009.

You won't believe how bad it can be...

"I've found traps that were Wildlife Services' that were never checked; come across them years later with skeletal remains of skunks or badgers or coyotes," said Tony Wasley, a mule deer biologist with the Nevada Department of Wildlife.

What could be more pointless than killing an animal in one of the most cruel ways imaginable, just to let it rot away...

The worst part is, almost no species is safe.

"Even though I was an experienced, professional trapper, my trap victims often included non-target species such as bald and golden eagles, a variety of hawks and other birds, rabbits, sage grouse, pet dogs, deer, and antelope, badger, porcupine, sheep and calves.

"My trapping records show that for each target animal I trapped, about two unwanted individuals were caught.

"Because of trap injuries, these non-target species usually had to be destroyed.

"The leg-hold trap is probably the most cruel device ever invented by man and is a direct cause of inexcusable destruction and waste of our wildlife," said Dick Randall, a former federal trapper, in a statement to Congress in 1975.

"Even when the right animals are captured, they often succumb in ways that would make many people cringe, including heat, thirst and exhaustion during the hot summer months."

Regardless of the species intended to be trapped, the suffering is inexcusable.

Did you catch that number above?

Let that sink in.

NO animal should have to endure the torture of a slow, painful death, trapped by steel jaws.

"Leg-hold traps have been banned in more than 80 nations and outlawed or restricted in eight states, including California, where voters in 1998 passed a proposition banning leg-hold traps, but allowing padded traps in some situations," according to the same source.

But lots of American states have no restrictions at all.

You can see how it's time for change.

Senator Bernie Sanders has been a long-term advocate for animal rights, and has co-sponsored numerous pieces of legislation to protect endangered species, as well as to combat animal cruelty.

That's why we're asking him to lead a movement in Congress that would ban cruel leg-hold traps throughout the United States.

Don't you want to stop this cruel, heartless practice of trapping defenseless creatures and leaving them to die in agony?

Then add your name to ask Senator Sanders to draft legislation that would ban these inhumane leg-hold traps, before any more innocent animals needlessly suffer!